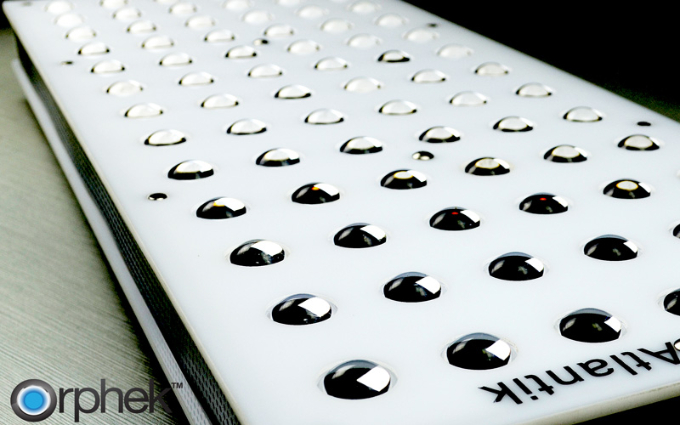 The Atlantik LED light from Orphek is the first new form factor from the LED company which has been revisiting the same fixture footprint for several years now. The Orphek Atlantik has a similar design of what you’ve come to expect from LED pendant fixtures – aluminum square box with four fans on top, individual reflectors and an acrylic splash guard, which is kind of attractive in its own way.

The Orphek Atlantik is larger version of the Orphek Nilus – a full color fixture featuring an arrangement of different colors including reds, UV, 450nm blues, 460nm blues and of course whites in 12k and 17.5 K flavors. The Atlantik LED fixture is fully dimmable with up to four channels of  color control. At 200 watts the Orphek Atlantik is meant for aquariums up to 36 inches wide and 36 inches deep. For aquariums a less than 36 inches deep, a different model comes with diffusers but the same amount of LEDs

The Orphek Atlantik measures approximately 24 by 8 by 2 inches and features 78 x 3 watt LEDs each run at approximately 2.4 watts . The LEDs include 28 17.5K white LEDs, ten 12K white LEDs, 24 460nm blue LEDs, eight 450nm blue LEDs, four high range red LEDs, and four high range 380-430nm UV LEDs. The brands of the LEDs used are unknown, but that seems to be the case with most Orphek LED fixtures.  The Atlantik “controller” offers Dawn/Dusk effects and is able to store up to three different lighting programs. Pricing is currently unknown but we expect that to be announced at MACNA in Dallas this weekend. The spectrum for each LED channel along with additional pictures can be found below.