Micro-reefs has been producing very nice acrylic pico and nano aquariums for a while now, continually expanding their products line including the Micro-reefs LED fixtures we covered at the show. Recenly they released an out of the box pico coldwater marine aquarium, but now they’ve partnered up with coldwater marine aquatics to create an even better out of the box coldwater reef solution. In theory the only modification needed would be thicker acrylic for the viewing panels along with a chiller (as is the case with the pico), but for this particular line the guys from Micro-reefs and colwater marine aquatics have taken things to a whole new level. 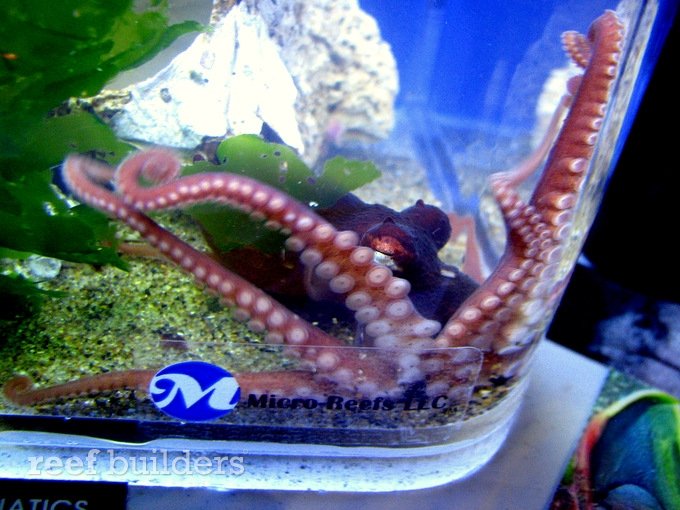 When stating that this kit is a complete out of the box coldwater reef solution, Micro-reefs isn’t messing around. It really doesn’t get anymore plug and play than this. Each complete kit comes with the previously mentioned thicker walled display system (thicker acrylic is needed to fight condensation resulting from the colder water), the new Micro-reefs LED fixture, two Ice probe chillers (vs one on the pico), a Digital Aquatics Reef Keeper Lite controller, and a small pump in the back of the system. Additionally when you order the temperate aquarium, you will get 15% off any order from Coldwater Marine Aquatics. We personally really couldn’t think of anything else that could potentially be added to make it a better system. The Micro-reefs coldwater system is truly designed by aquarists for aquarist.

It isn’t just the specs on paper either that make this a kick ass system, the whole tank including the stand is a really premium setup that is visually really pleasing. The black acrylic stand, with clear acrylic lip and base really results in some very nice eye candy. Every aspect of the tank, including the stand and canopy is hand build right here in the United States with acrylic manufactured in the United States, so it doesn’t get much nicer than that. Be sure to check out the pictures below.