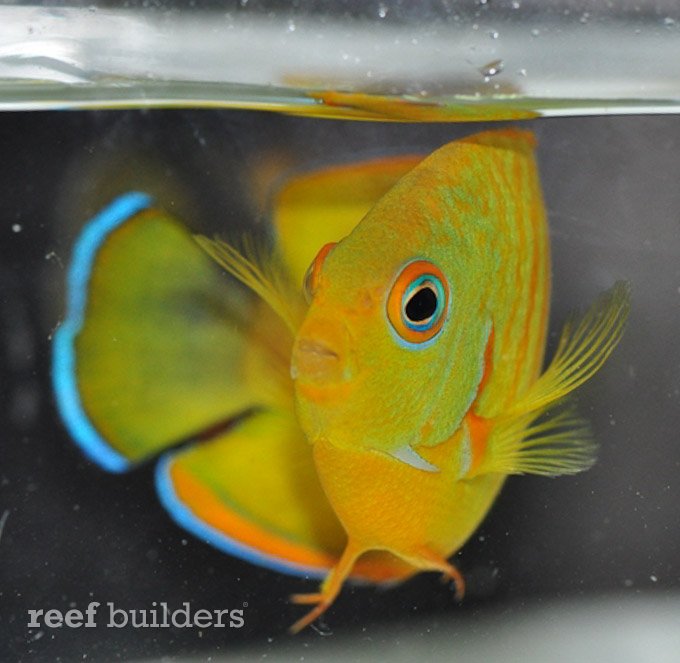 Of all the hybrid angelfish out there the Tigerpyge stands gills and fins above the rest for the most stunning amalgamation of features from two dissimilar species. Resulting from the cross of a Centropyge eibli and Centropyge flavissima (the Indian Ocean lemonpeel to be exact), for us the affectionately named Tigerpyge is the king of hybrid dwarf angelfish whose pictures we have been drooling over since our infancy in aquarium keeping. Thanks to our prolific Hong Kong rare fish contributor Jimmy Ma we now have an amazing close up look at the third Tigerpyge to be collected for aquaria within the last couple of years.

The modern saga of the Tigerpyge hybrid began three years ago when Old Town Aquarium scored the first well-documented specimen to make it to America. Then about a year ago Red Heart King in Hong Kong obtained a magnificent small specimen of Tigerpyge which showed what this amazing cross looks like when small. With a third picture perfect hybrid lemonpeel angelfish in as many years now surfacing in the aquarium world, we have hope that this specific cross from Bali and Sumatra may be just a tad more common than some other fluke hybrid crosses. Perhaps one day if collectors go on the lookout for Tigerpyge they’ll be found in somewhat of an abundance akin to all the blacktail lemonpeel angelfish that frequently come in from the Pacific Ocean.