Cobalt Neotherm fully lives up to our ideal aquarium heater

If we were to describe our ideal aquarium thermometer, the rundown would sound a lot like the the spec sheet for the Cobalt Aquatics Neotherm heater. We’d start shaping our aquarium heater with its appearance, aiming for a low-profile design that can slip behind rock work and easily inside sumps and filters, and of course we’d make it matte black so that it is as stealthy as possible.

The sleek profile of the Neotherm is thinner than an iPhone 4, it is matte black so it readily disappears from view inside the aquarium, even when it is in plain sight. Although most die hard reefers will have a separate section or filter where they easily hide their heaters, there’s still a majority of marine and freshwater tanks that are using power filters and canisters so the heater has to go inside the tank. What better choice for heating your aquarium than to use a model which is as inconspicuous as possible. Below you can see various angles of one of our own coral aquarium with the Neotherm in the top, back left of the aquarium, all but invisible even when you try to look for it. 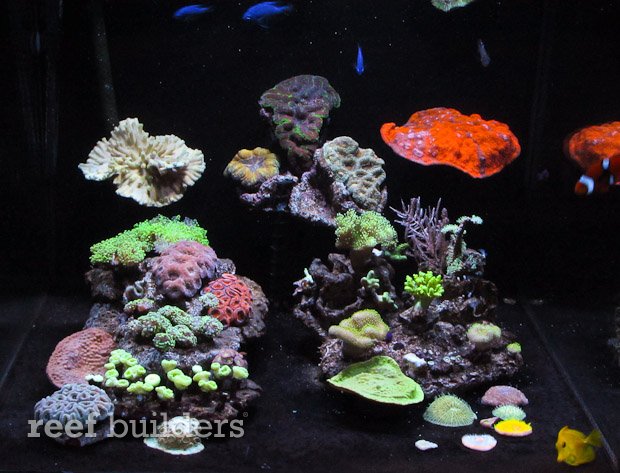 As with all new products we try to hold a little bit of skepticism to extraordinary claims when it comes to the features, performance and longevity of a product.  However, with the Neotherm Cobalt Aquatics has actually imported and adapted a device from Europe’s AquaEl where the heater has been heating aquariums for the better part of three years.

There once was a time when the Ebo-Jager heater was the go-to heater for nearly all fresh and salt water applications but with a design that has crawled to a standstill for nearly 15 years, we’ve sought an alternative to the Ebo for a looooong time. With the arrival of the advanced Neotherm heater, we will gladly suggest this heater for all temperature-critical applications, as all aquarium are, and we will insist on it for the budding aquarists among our own friends and family. We’ll even go a step further in stating that for all of our future heater purchases and replacement, the Cobalt Aquatics Neotherm heater will be the first consideration.