The realm of human interaction can be remarkably complicated. But generally speaking, as long as certain social conventions and legal constraints are observed, most people will manage to coexist in peace and seldom resort to violence. Only in cases of extreme privation do we actually choose to eat one another!

Unfortunately, the fish in your new saltwater aquarium won’t see things the same way. If you aren’t careful in selecting compatible specimens, the fish in your tank will be constantly at—or in—each other’s throats. So, think Salt Smart and avoid these common compatibility blunders when choosing fish for your saltwater community:

Big fish eat little fish. That fundamental law of nature doesn’t get rescinded just because specimens are taken out of the wild and placed in an aquarium. The panther grouper (Cromileptes altivelis) you’ve got your eye on will still think “bite-size snacks” if a school of blue-green chromis (Chromis viridis) swims by. And keep in mind that some fishes, such as the various frogfishes, can gulp down specimens almost as large as themselves. Even primarily herbivorous species aren’t above opportunistically consuming tankmates small enough to fit in their mouths. 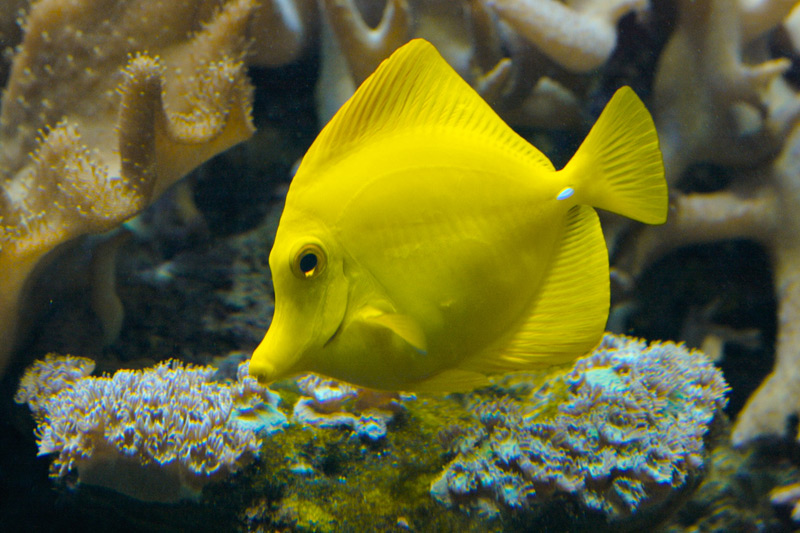 Though there are exceptions, conspecifics (members of the same species) tend to fight like cats and dogs in aquariums where space is often too limited to allow more than one specimen to establish a territory. And the more confined the aquarium space, the more intense these territorial disputes become. Thus, it’s generally best to keep only one individual of any given species per tank.

It’s wise to tread carefully when adding congeners (members of the same genus) as well. Two tangs of the Zebrasoma genus, for instance, will be more inclined to fight when kept together than, say, a yellow tang (Zebrasoma flavescens) and a Kole’s tang (Ctenochaetus strigosus).

3. Adding a look-alike or resource competitor

The contempt that familiarity breeds isn’t strictly limited to conspecifics or congeners either. Oftentimes, two unrelated species that are very similar in color or morphology, have the same dietary preferences, or tend to occupy the same niche on the reef will also go at it “hammer and tong.”

Some fish are simply “naughty by nature.” It just seems to be in their DNA to make life miserable for tankmates. Certain triggerfishes, for example the undulate triggerfish (Balistapus undulatus), get so big and belligerent that they really need an aquarium all to themselves. The various dottybacks, though small in stature, are likewise notoriously nasty, so their tankmates must be chosen with considerable care or they should be kept by themselves.

A Step-by-Step Guide to Mixing Saltwater