They belong to genera with names like Zoanthus, Parazoanthus, and Palythoa. They’re sometimes called sea mats, button polyps, or colonial anemones. Reef hobbyists commonly refer to them as “zoas.” Whatever name you apply to them, the zoanthids (family Zoanthidae) enjoy a prominent place in the hearts of many marine aquarium hobbyists—and with good reason.

Zoanthids are generally quite hardy and rugged, fairly adaptable, and usually among the first sessile invertebrates novice reefkeepers attempt to maintain in their tanks. Of course, plenty of experienced reefers love them too. Zoas do have their dark side, however, and I’ll explain why a little further on. 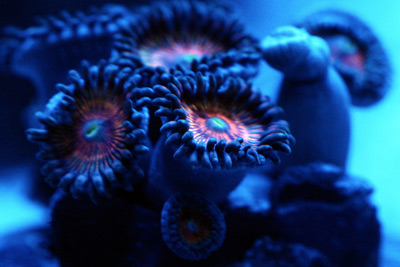 Individual zoanthid polyps are essentially an oral disc fringed by a ring of tentacles on top of a stalk. The oral disc is usually around a half inch or less in diameter, but it can be much larger in some species. The tentacles and stalks can be quite variable in length depending on the species as well. In some zoas, the polyps are solitary, but most you’re apt to come across in the trade are colonial, with the polyps emerging either from an encrusting mat of tissue, called a coenenchyme, or a runner of tissue, called a stolon.

In terms of coloration, zoas range anywhere from drab shades of brown or beige to stunning, eye-poppingly garish shades and combinations of just about any color imaginable. More often than not, zoas are sold not under scientific names, but under creatively descriptive trade names that hint at their colors, such as “Candy Apple,” “Blue Hornets,” “King Midas,” or the surprisingly apt “Green Bay Packers.” I even came across a variety called “Darth Maul,” which, believe it or not, makes sense once you see it.

In nature, zoa species occur at various depths and cover a lot of different reef real estate, so it’s important to keep in mind that not all are created equal with respect to their lighting and circulation needs. Most will do well enough given moderate levels of each, but if you really want your zoa colony to thrive and look its best, try to Identify it at least to the genus level to get a sense of the depth and niche on the reef in which it occurs. That will help guide your lighting and circulation choices as well as where you place the colony in your system.

For example, I once had an attractive orange Zoanthus sp. colony that hung on to life but really failed to thrive under moderate power-compact lighting, despite being placed high in the tank. I noticed that it even started to take on a somewhat stalky, leggy appearance as it strained upward toward the lights. When I switched the lighting in that system to more intense metal halides, the polyps quickly returned to their normal, more button-like appearance and the colony’s growth absolutely exploded. 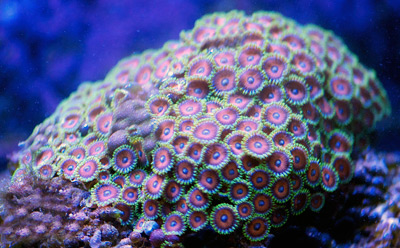 Speaking of explosive growth, do be aware that, given proper conditions, many zoanthid species can easily outcompete other sessile invertebrates for space on the reef. Colonies tend to continuously and rapidly expand outward to encrust any adjacent hard substrate. They’ll even spread right up onto the aquarium glass if allowed. It’s a good idea to leave a little open space—a buffer zone, if you will—between zoanthid colonies and any adjacent surfaces that you don’t want them growing on (such as rocks supporting neighboring corals).

Getting back to my earlier reference to zoas having a “dark side.” I’m referring here to the fact that many zoanthid species (particularly Palythoa and closely related species) contain in their mucus and within their tissues a powerful neurotoxin called palytoxin. Handling zoanthids and accidentally getting this toxin in your mouth or a break in the skin can make you very ill or even prove deadly.

Now, not all zoanthids are equally toxic, but because these inverts are usually sold under trade names rather than scientific names, there’s no way for the average hobbyist to know what species he or she is actually dealing with. Thus, the wisest course of action is to treat all zoanthids as though they are toxic. That means, any time you’re handling zoanthids or working in a system containing them, you must:

If you have a cut, crack, or abrasion in the skin of your hand or arm, it’s best to keep your hands out of the tank until it heals. Also, protective eyewear must be worn in addition to gloves if you do any propagation work with zoanthids outside the aquarium. Of course, if you have children in the house who may be tempted to reach into the aquarium, zoanthids are not a good option.

This warning isn’t intended to frighten anyone away from keeping zoanthids. I kept several colonies for many years with no problems whatsoever. But the threat of poisoning is very real, and there are numerous reports of hobbyists learning this the hard way. So just be careful and use commonsense protective measures when working with these toxic beauties.

BlueHarbor gets ready for the ultimate deepwater Hawaiian collection