There’s an unusual green birdnest that’s been growing over at Cris Cap’s AquaticArt that we’ve been looking at for years, but didn’t fully appreciate its uniqueness until this past weekend. The Photon Man Sanjay Joshi came on an aquarium tour with us this Friday during one of his famously long layovers and among the other locations we toured, Dr. Joshi was particularly enamored with a special colony of Seriatopora guttatus in AquaticArt‘s 600 gallon reef display.

If we recall correctly, about four to five years ago this particular colony of green birdnest coral started developing branches with a lighter, more teal-blue coloration in Cris Cap’s home display tank. At the time most of us thought nothing of it but over time the ‘new’ coloration has spread from one end of the colony to the other and now the different colors are more interspersed than they initially were.

The result of this mixed coloration has turned this particular colony of S. guttatus into a very neat example of how corals can still surprise us in unexpected ways. Sanjay was fascinated by the two-tone nature of this green birdnest which snapped myself and Cris into realizing that this kind of phenomenon is pretty much undocumented. Who knows what causes this unusual sort of dual coloration in Seriatopora corals but one thing’s for sure, AquaticArt will have a booth at MACNA 2014 and they are likely to have some of this coral available as frags. 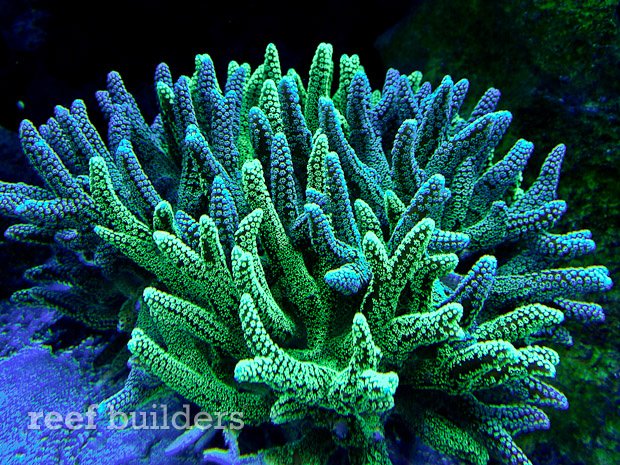