AquaticLife has been flirting with incrementally interesting LED lights for some time now, most of them becoming rather pedestrian within a short time after release, but their Edge LED is perhaps their big coming out as an innovator. In essence, the AquaticLife Edge LED is a dual striplight fixture with a single cord and edge mounted timer to complete the package.

The Edge LED from Aquatic Life comes in a 24, 36, and 48″ length striplight at very competitive prices, with a whole suite of features to make it stand out. First of all, this is a damn good looking light! The super thin profile of the light is endowed with a minimalist design language that carries all the way through the mounting legs and built-in timer. One of the great things about having dual strips in the same housing is that there’s only a single power cord to contend with. 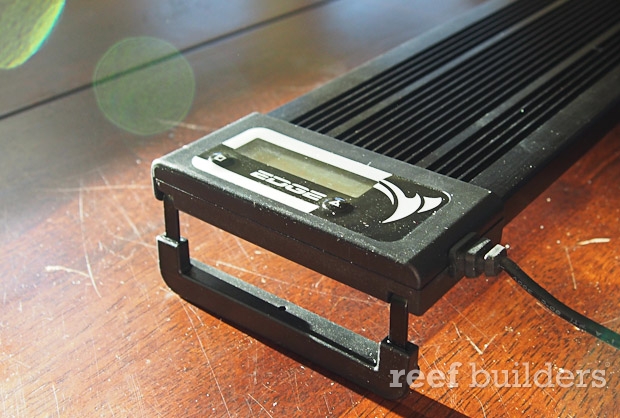 The main lighting of the Edge LED light is provided by one mixed strip of white, blue and red LEDs for a broad spectrum effect and coloration. A second strip is populated purely by white LEDs and this strip could be considered the more nutritious or PAR-boosting part of the Edge LED fixture. While it may seem like the Edge has only two channels of light control, AquaticLife saw fit to squeeze in a third channel of sparse blue LEDs specifically for a pleasing, aesthetic moonlight effect.

The real guts of AquaticLife’s Edge LED is in the end of the fixture, with a simple bright LCD timer that gives fast, quick access to all the programming and timing functions. Onscreen icons indicate what timer functions have been enabled and what modes are currently in progress. 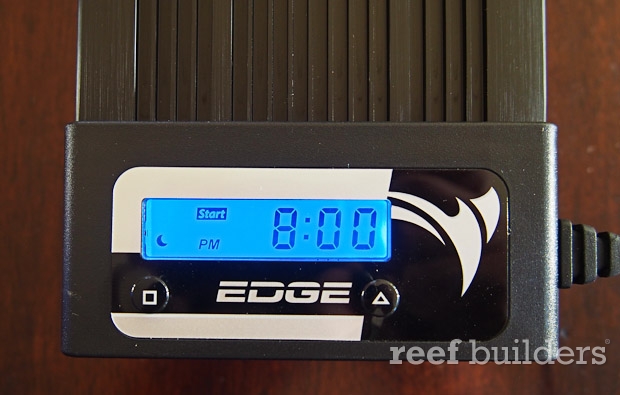 As you might expect the extreme competitive pricing of the AquaticLife Edge LED doesn’t come with a few compromises. While it is possible to enable ramping up and down of the channels through the timer, it is not possible to actually set a maximum brightness, or really to dim any channel on the fly. Controlling photoperiod is almost as good as being able to adjust absolute brightness, but we know LED users will be missing it a little bit.

Furthermore, the decision to use all white LEDs on the secondary strip might help AquaticLife attain certain critical PAR values of brightness over the aquarium, but the use of blue LEDs in the second strip would be better received by the marine aquarium crowd. The currently white-light dominated AquaticLife Edge LED does seem to open the door to a “Marine Edge” LED fixture down the road, should the company choose to entertain that possibility.

The AquaticLife Edge LED fixture is a step in the right direction for the company, and it raises the bar for what we’re coming to define as a next-generation entry-level LED aquarium light fixture.