How to Frag SPS Corals

Sps (small polyp stony) especially Acropora, have consistently been among the hottest corals in the aquarium hobby for the last twenty years. They are most likely the easiest coral to frag; that being said, they are some of the most difficult corals to keep which is why so many hobbyist desire to grow them in their aquarium.

The trend nowadays seems like frags are getting smaller such as less than half an inch. However, you can make a frag any size you want comparable to the size of the frag plug.

You can start with a healthy SPS colony but some colonies that have rapid tissue necrosis may need to be fragged. For large colonies you may use a band saw for precision but if you plan to leave the colony in the tank while you frag, coral cutters are necessary.

It is important to select frag plugs based on the type of coral you intend to glue. For example, encrusting corals such as Montipora nodosa, would require a frag disc; while Montipora digitata would benefit from a drilled plug to help stabilize it during the glue curing process. 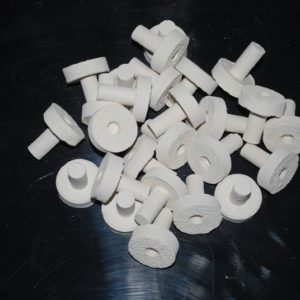 First, soak the plugs like you would with any other coral. Then, cut the end of the desired coral; more than intended pieces will break off when you cut Montipora so you will end up with multiple frags.

Next, dry your plugs and the bottom of your frags. Add a decent amount of glue similar to the size of the bottom of the coral. Set the coral in place, wait about 30 seconds, and then add the new frag into the tank.

Check on the frag every so often during the day to be sure it has not been knocked off and fallen into another coral; you also need to baste off the mucus it has secreted but it usually only requires this initially.

In order to frag completely encrusted corals like Cyphastrea, you will need to use a band saw. Simply cut around the polyps the desired size of your frag; try to make the frags as flat as possible to make it easier to glue.

These often require more glue because you may need to fill the gaps between the coral and the plug. Follow the steps above to glue and cure the coral.

A few hours after fragging be sure that the coral is in good flow and light again. The polyps will extend and the coral will begin to encrust around the plug.

Sps corals are the simplest and fastest to frag which makes it easy to trade corals with someone. Sps corals sometimes grow surprisingly fast and make fascinating homes for fish and crabs; so start fragging and give them a try if you never have before.

Mitratus Butterflyfish In The Shape of a Burgess, Or The Other Way Around?