Eye of the Tiger Indophyllia Is A Diamond in the Rough

Sometime, when presented with a huge selection of the craziest Donut Corals (Acanthophyllia deshaesyana), your attention can’t focus on one particular piece, as they’re all gorgeous. But on the side, in the middle of the rejected one, a pure jewel stands alone. In the middle of this profusion of red, orange, green, blue of all possible tones, there is one piece that will catch the eyes of only the pure coral lovers.

This pretty large piece scored by Bali aquarium, was actually on the reject photo list of a collector from central Indonesia. The reason why this piece is so special, because it’s actually not the classic donut species, Acanthophyllia deshaesyana, or the even more classic button coral Cynarina lacrymalis, but the more elusive and sought after Indophyllia. It’s very possible that this species is actually a hybrid of the other two donut and button corals, but only genetic study could answer this question. 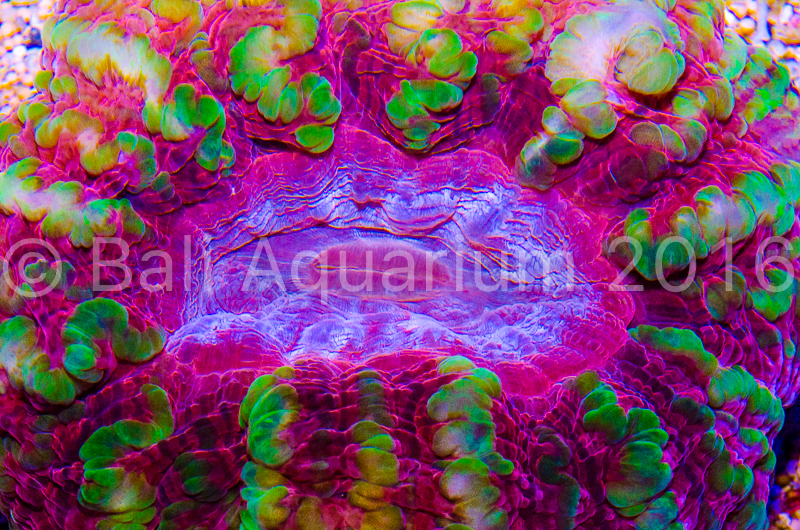 Both species of solitary corals live in the same kind of environment, on deep sandy slopes, often below 90ft deep. Even if Cynarina tends to be attached on rocks scattered on the bottom and Acanthophyllia is normally free living, they often occur in the same area, thus hybridization of these very closely related species is meant to occur and give us one of the most insane and rare coral of all.

This superposition of very fluorescent deep green and burgundy is quite unique. Superposed on the blue color of the mouth ends up in a very finely colored up coral that will become the masterpiece and priceless Persian Rug of any reeftank around.

Pinto Seahorses: Captive Bred Seahorse Can Get Domesticated Too