Acropora millepora: Everything You Ever Wanted To Know About This Coral

Acropora millepora is probably the most famous Acropora right after Acropora tenuis. Demand for this SPS coral waxes and wanes but it’s always a very popular coral, and holds a very special place in our heart!

What’s so special about them? The reason why this particular Acro is so special to us is pretty simple, anytime you snorkel a shallow calm reef, you can spot them from a logn way away. They just glow over the reef, like a magnet pulling our attention to them. Their multicolored bright coloration together with their fluffy appearance due to their long extended polyps has no other equivalent in the Coral World.

They live in very shallow, protected, calm and turbid reefs, almost sticking out of the water at low tide. Their coloration has no equivalent, with often bicolor tips with an orange axial corallite contrasting with the rest of the colony color.

The tips below is usually more pale than the rest of the colony due to the lack of golden brown zooxanthellae, and the center of the colony is brightly colored with contrasting color long tentacles that give the fluffy appearance. Tentacles are most of the time green, white and sometime red.

The colony colors spans the entire rainbow, from light pink to purple, and red, from yellow lime to bright green and orange gold. No other species of coral as such a broad spectrum of colors, really, Acropora millepora owns them all!

On top of the crazy coloration, what I love about this species is the particular elaborated shape evolution that it went through to develop the perfect food and light trap, all in one package.

It’s by trying to understand why the tentacles in the center of the colony are always longer and denser than at the tips of the branches that I’ve deepened my sincere respect for coral evolution. The perfect homogenous corymbose shape of the colony has evolved such a way, because in a stream of water, all these small short comb like branches act as some sort of speed bumps for the water that flows on top of it. Slowing it down, and creating many small vortexes for the particles to fall into the hungry tentacles filled polyps that lie in the center of the colony.

While the mainly autotroph polyps that sits on the tops of branches are held in the spotlight for best possible exposure, the mainly heterotroph hungry polyps under are busy catching food. This is just the perfect adaptation, beauty and efficiency, all in one, that’s why this Acropora is so common, widespread, fast growing etc.

As much as I love this coral, as a coral farmer I’m so proud of being able to produce exact mini replica of the parent colony at just a couple of inch in diameter and just above 3 month of growth. I’m most of the time disappointed by their look in aquarium.

If sometime they can almost keep the colony shape, just with skinnier branches, and in tanks with crazy flow, the color is never up to the ocean standard. The pink/purple that turn us on, on the reef, comes up grey under blue LED light, that’s such a pity.

But the lime and red based specimen look much better under blue light, not as neat as in the ocean, but pretty good. Unfortunately most of the time the colony shape is way off track, due to lack of powerful flow.

The flow problem is going to get quickly resolved in the future with all the technology coming out such as gyre and Hydro pumps. But for the light issue, there are still some work to be done.

Another interesting aspect, is that as mentioned earlier, is an eating machine, and feeding is very important for their energy intake. So improvements in feeds, and avoiding pollution need to be done. 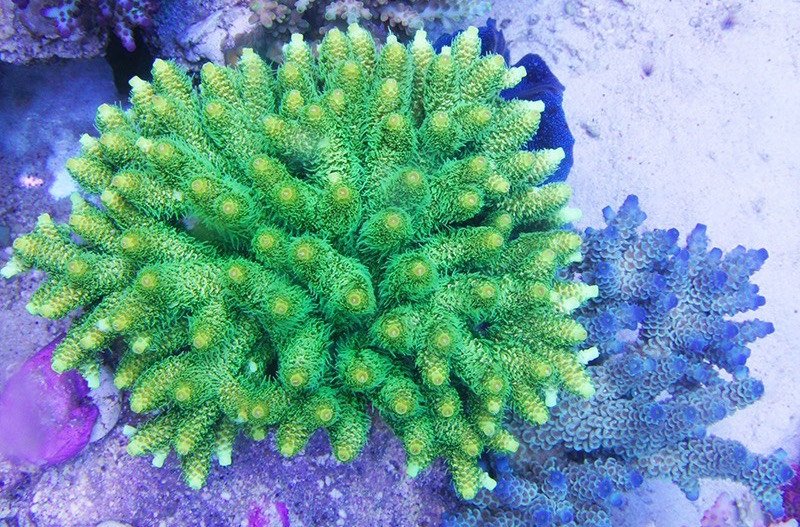 I always suggest my customers 2 tricks: Temperature: On our main millie farm, we have differences of temperature all along the year, and I noticed that during the dry season when the water becomes clearer and colder, the color pops up. So I always tell my customer to keep their corals cooler if they want them to shine.

But a little warmer if they want them to grow: 73-74 for color, and 77-79 for growth. Keep in mind that the cooler, the higher oxygen concentration is, and corals love oxygen, especially shallow water ones.

Feeding: The Soup method. In the Ocean, there are constant successions of blooms. Phytoplankton blooms for few days with 3 feet visibility, followed few days later by copepods blooms, with small crustacean swimming everywhere in the water column, then bacterial, shrimp and fish larvae, eggs, worms… so the problem is filtration in an aquarium. So the best I think would be to give a plankton bloom every time for few hours just before any large water change.

I’m happy to share my love for millies, and hope to see more and more natural looking one popping up in aquariums all around the world!

May 17, 2017
Site Sponsors
Reef Builders is Supported by: