Cordelia Banks Is The Healthiest Caribbean Reef We’ve Ever Seen

Cordelia Bank is an extensive coral reef located on the southwest coast of Roatán Honduras. We had the opportunity to dive this protected area and can safely say this is the healthiest Caribbean staghorn reef we’ve ever seen.
Covering 17km2 there are 4 banks and in 3 of them, the shallowest parts are covered in the critically endangered species Acropora cervicornis. Smith Bank, the most studied of the 3 banks, has an approximate area of 21 hectares (52 acres), and could possibly be the largest patch of A. cervicornis within the Mesoamerican Barrier Reef.

Cordelia is separated from the mainland by a channel of water 150m (500 feet) wide. This relatively small separation from the mainland is one of the most important features contributing to the survival of this rare Caribbean habitat.
One of the biggest killers of coral reefs is sediment runoff, and the offshore location of Cordelia Banks gives it a buffer from land-based runoff. The bank is surrounded by steep walls, and exposure to SE tradewinds results in a steady current of fresh seawater flushing over the reef. 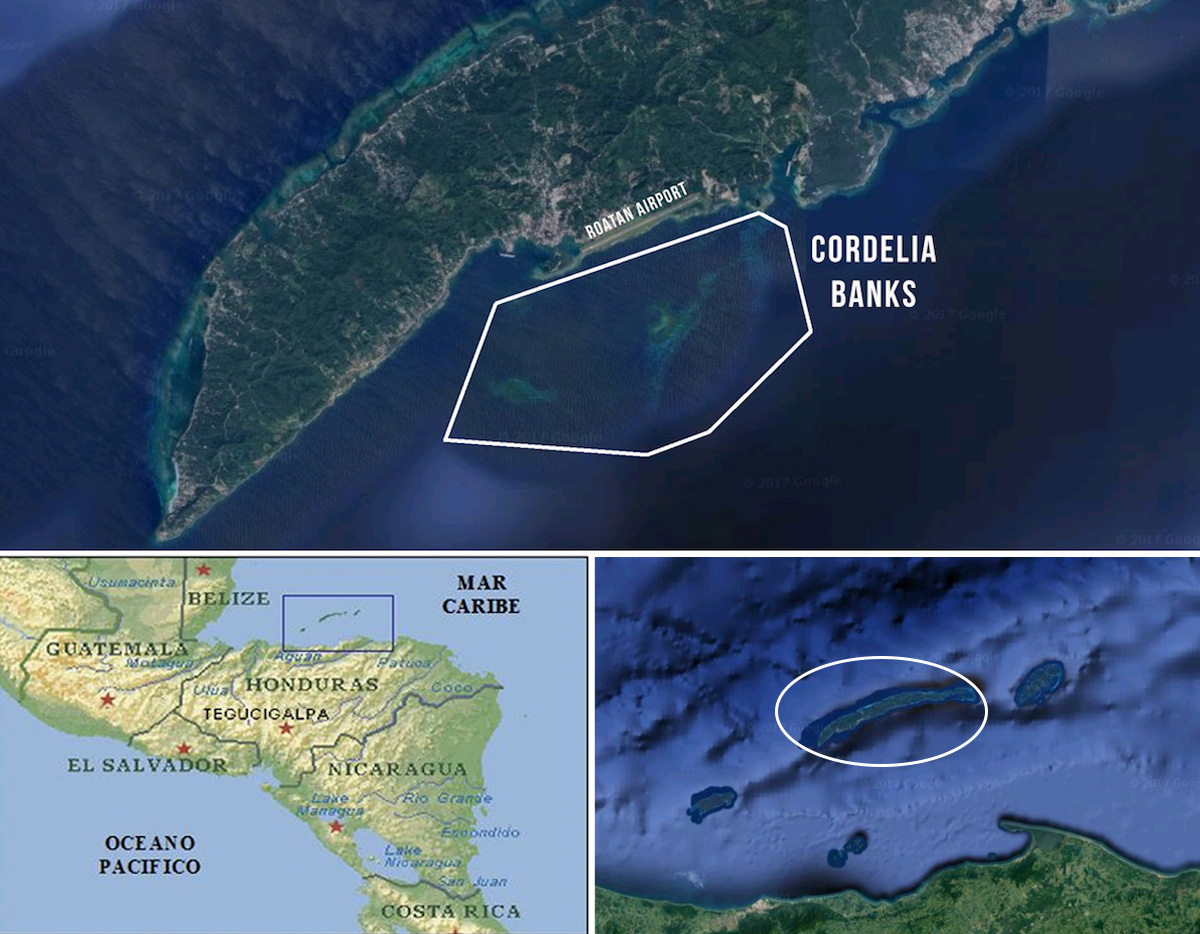 Over the past decade, coral coverage in Roatán has declined significantly due to coral bleaching events in 1998 and 2002. Other factors such as runoff from coastal development, disease outbreaks, overfishing, and damage sustained during storms and hurricanes further exasperated the decline.
Yet, Cordelia Banks has maintained extensive coral cover, a sight which is becoming all too rare in the Caribbean.
The majority of Cordelia Banks, including the dive sites with the highest density of coral, are closed to dive tourism. A special permit is required to visit these areas and restricted access helps reduce stress on this fragile habitat.

I was invited to dive in Cordelia by Angela Randazzo a Ph.D. student studying diversity and resilience in Cordelia. For three days we went diving in Cordelia to record coverage data using Atlantic and Gulf Rapid Reef Assessment (AGRRA) survey methods.
For each dive, I completed three 100m benthic transect surveys. To do this I placed a rope line that has plastic ties set every meter along the rope.  For each point, we record what is directly below.
The points can be a species of coral, a species of algae, a type of invertebrate, rocks, or sand. At the end, you have 100 data point per survey. We did this three times per dive for three dives a day! We were so busy working I only took my camera on the last day to photograph this jewel of a reef.
AGRRA surveys have been carried out every two years in Cordelia since 2006. The findings have shown that Cordelia Banks boasts a staggering 70% live coral cover. This is the largest coral cover ever recorded in over 800 sites across Mesoamerica. 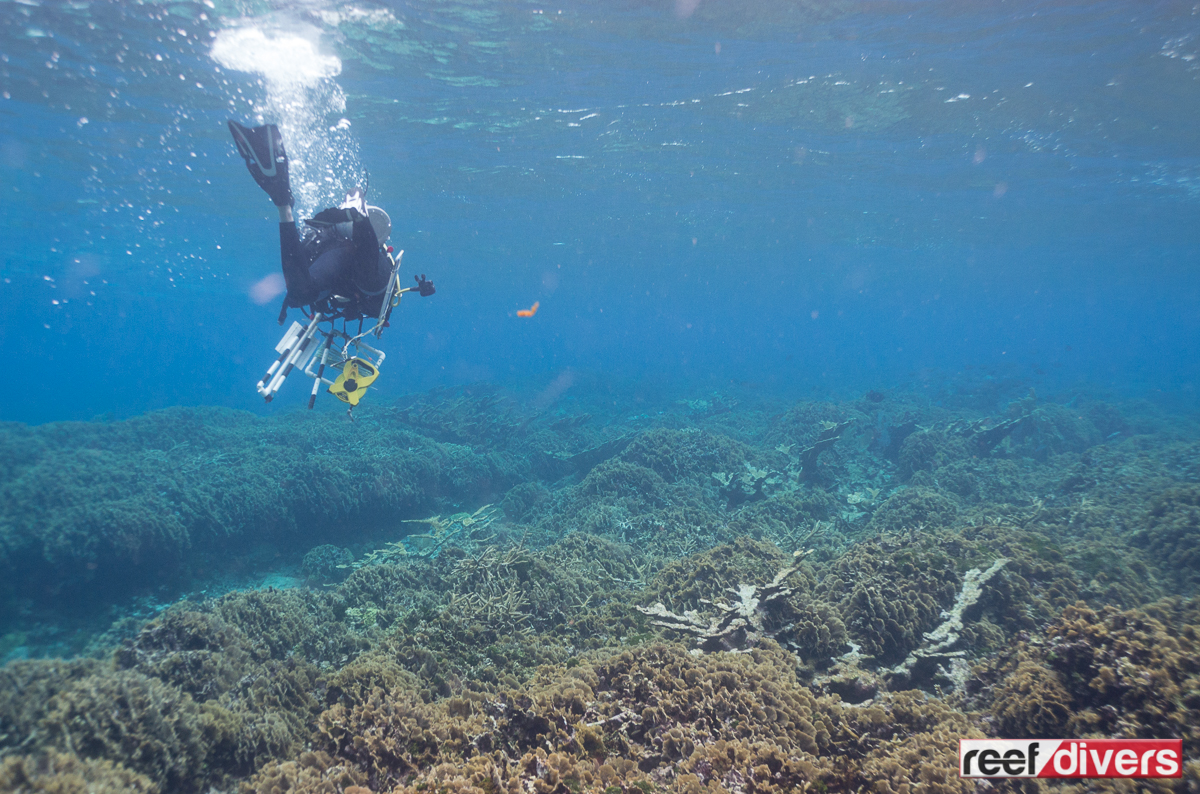 The extensive fields of Acropora cervicornis staghorn coral in Cordelia is an important source of coral spawn for neighboring reef. Caribbean staghorn corals are listed as critically endangered which makes protecting this reef of the utmost importance.
Coral spawn from Cordelia can help to repopulate reefs of the Caribbean where staghorn has already disappeared. While diving in Cordelia we noticed that not all staghorn looked alike, and wonder how many unique genotypes are on this reef.

There are a variety of coral habitat types in Cordelia. The shallowest and most impressive are the Acropora cervicornis staghorn reefs, between 1-5m deep (3-16 feet). Mixed in with the Acropora are mounds of yellow Porites furcata.
The second habitat is parallel ridges dominated by thin platting lettuce coral Undaria tenuifolia. These habitats start between 2m down to 10m. You will also find the Undaria mixed in with the A. cervicornis coral at shallower depths.
The third habitat is a mixed reef. These are below 5m and extend to the edge of Cordelia banks reef wall around 20m deep. Here you find a mixture of gorgonian soft corals, sponges, and nearly every species of Caribbean stony coral. So far there are 43 species of corals found in Cordelia from the 62 species in the Caribbean!

See also  Giesemann's G-tron premium aquarium controller makes a splash in two flavors
Near the edges of the cervicornis reef, there are pockets of branching elkhorn corals mixed in with the staghorn corals. This habitat is found in the shallower parts of the reef and we photographed this area while snorkeling.

Why Acropora Corals Are Important

In the images of Acropora coral from Cordelia Banks you can see a fortress of staghorn corals with very few fish swimming in the water. This is because the reef is much larger than meets the eye. The top 30 cm (12 inches) or so of the reef is living coral tissue, but below is a labyrinth of old branches several meters thick.
Colonies can grow quite large with branches up to two meters (6 feet) in length with a diameter up to 8cm (3 inches). Healthy stands of Acropora can contain hundreds of colonies which grow into fields which create critical habitat for juvenile fish.
Protected areas like Cordelia Banks gives us hope for the future of Caribbean reefs. They are time capsules which remind us why we need to continue to protect and restore reefs not only in the Caribbean but around the globe. 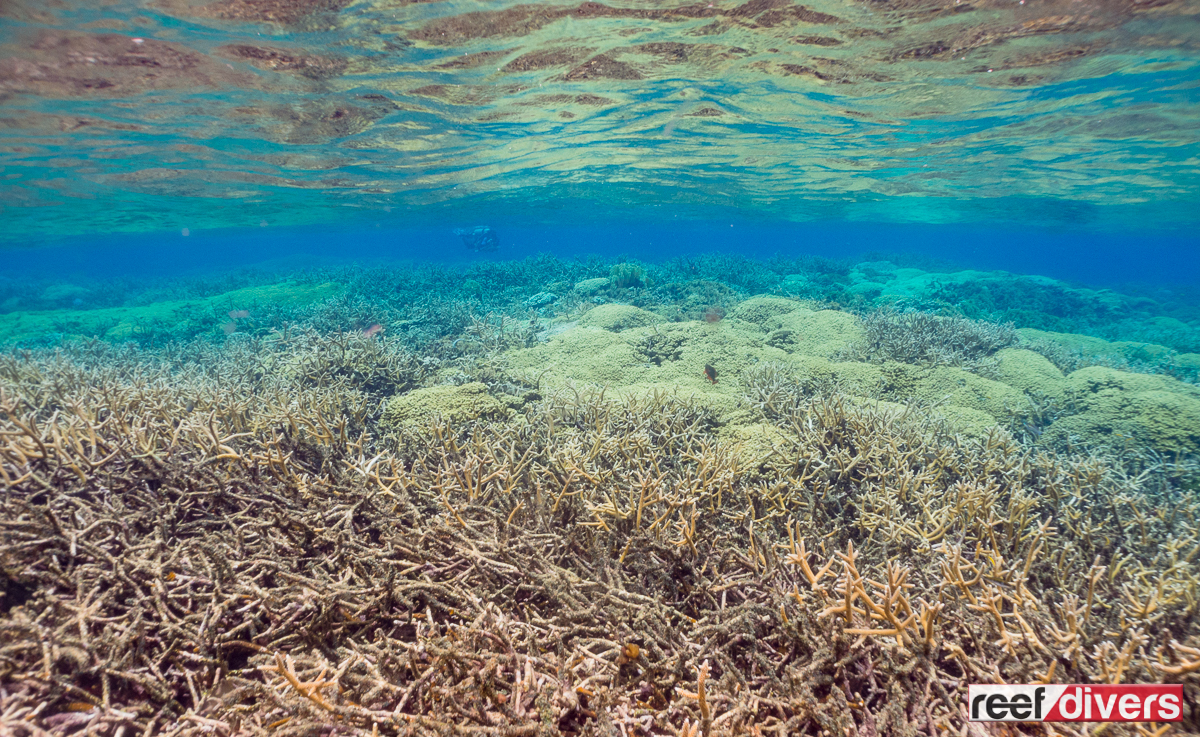 Jellyfish Prove You Don't Need A Brain To Sleep

Say Goodbye To Damp Wetsuits With The Blawesome Wetsuit Dryer