There’s many different kinds of nuisance algae that can cause problems in the reef aquarium and Bryopsis can be one of the worst, or one of the ‘best’ depending on your perspective. No fish or invertebrate herbivores will eat Bryopsis so it won’t go away on its own, but there is a simple treatment that easily eradicates it from reef tanks.

Long before fluconazole was discovered as a treatment for Bryopsis, old school reefers once turned to Kent Marine’s Tech-M magnesium supplement which had a unique formulation that happens to kill Bryopsis algae. Brightwell Aquatics has resurrected this special magnesium supplement now named Hydrat-MG and invited us to test this new additive.

It just so happened that I had a small patch of Bryopsis developing in my current reef aquarium and figured it’d be a good chance to document whether Hydrat-MG works as well as the old stuff. The 60 gallon tank consumes a fair share of Magnesium so I generally dose it with 20 ml of magnesium supplement everyday. 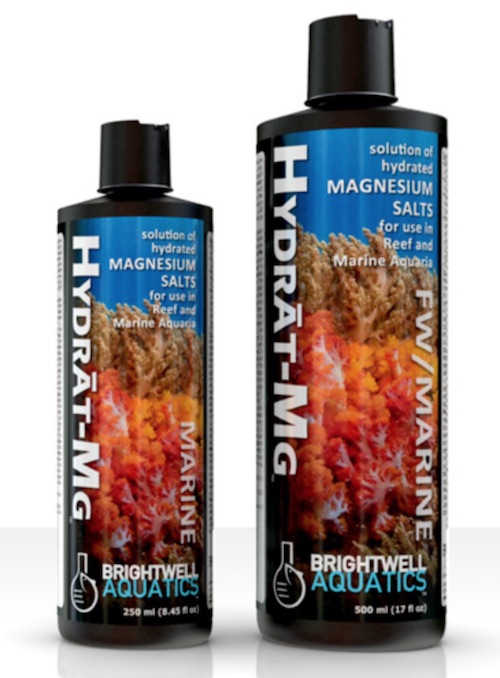 It only took 10 days to see a big turnaround in the health and growth of the algae, so 200 ml of the Hydrat-MG for a 70 gallon system (including 10 gallons in the sump). At the start of the treatment magnesium level was around 1,350 ppm and now 25 days later the concentration is 1,500 ppm. Four weeks after the start of the treatment and about 500ml total, I haven’t physically touched the algae yet the Bryopsis is virtually gone and has stopped spreading.

If you’ve got any problems with unwanted algae get a firm ID on what kind it is first. If it turns out that you have unwanted Bryopsis in your tank you might as well kill two birds with one stone and use Hydrat-MG as your magnesium supplement. Hydrat-MG has clearly succeeded in replicating the effectiveness of Tech-M in both increasing magnesium levels and killing this unwanted algae species. [Brightwell Aquatics]