Grafted Corals, or ‘GFP Infections’ are among some of the most interesting and bizarre coral ‘strains’ available to us in the aquarium hobby. The phenomenon has been documented in a wide variety of corals, most often in small polyp stony corals like Acropora, Stylocoeniella, Astreopora, and the most notable being Montipora.

The World Wide Corals Grafted Cap is perhaps the best known example of GFP infection in aquarium corals but a new strain called the Sunfire Cap is even more ostentatious than the WWC Grafted Cap. Despite sporting the same uneven blend of red and green pigment, what makes the Sunfire Cap so much more attractive is how brightly its polyps display the base coloration – polyps on red tissue are bright orange while polyps on green tissue are bright green. 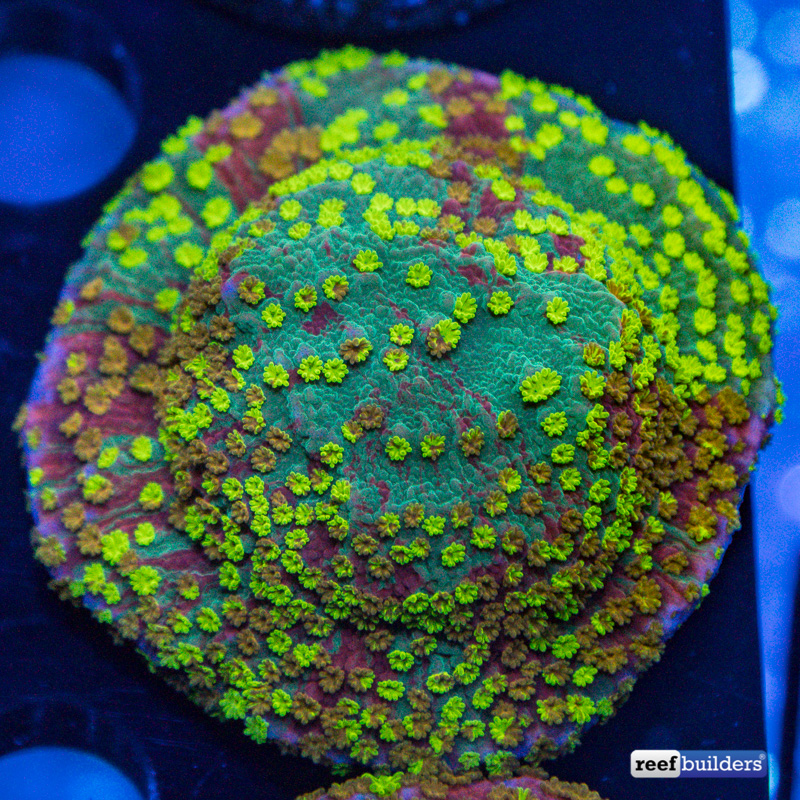 While the original WWC Grafted Cap can exhibit some degree of color mixing in the polyps, since the Sunfire Cap has brighter polyps the effect is much more pronounced in this strain. We’ve seen the Sunfire Cap around for the last few years but this past weekend while taking a tour of ‘The Farm’ at World Wide Corals we got to see these two strains side by side, grown under identical conditions.

The difference between the WWC Grafted and the Sunfire Caps is very clear when you see them side by side. The Sunfire Cap may have the brighter polyps but the WWC Grafted Cap has a brighter, higher contrast base coloration; ie. the Sunfire looks better up close but the WWC Grafted has a proven track record of developing into stunning, scrolling capricornis colonies. We truly living in a golden age of reefkeeping with access to so many fine coral strains, and now collectors have one more to add to their wish list.