Navigobius kaguya Is Another Spectacular Dartfish From Japan & Philippines

Navigobius has been one of our favorite groups of dartfish since the genus was erected in 2009. So it is with great pleasure that today we get to add another new species to the genus, Navigobius kaguya.

Until now there has only been two other species described in the genus, the sensational Navigobius dewa from Japan and Navigobius vittatus from Brunei. There’s been one other addition to the genus but that placement seems dubious and will need to be re-evaluated in the future.

Kaguya’s dartfish was described based off two specimens, one from Japan and another from the Philippines, both collected relatively deep at 24 meters (137 feet) in Japan and 55 meters (180 feet) in the Philippines. Like all dartfish Navigobius has a pronounced elongated body with split dorsal fins, which sport very attractive color and pattern in this genus.

Navigobius kaguya is distinguished by having a first dorsal fin which is taller than the second, and a body color which is distinctly orange, pinkish or yellowish grey in smaller specimens. Where N. dewa and N. vittatus have a pattern of purple or yellow stripes in the dorsal fins, in N. kaguya the yellow stripe is broken up into a series of yellow spots, especially in the first dorsal fin. 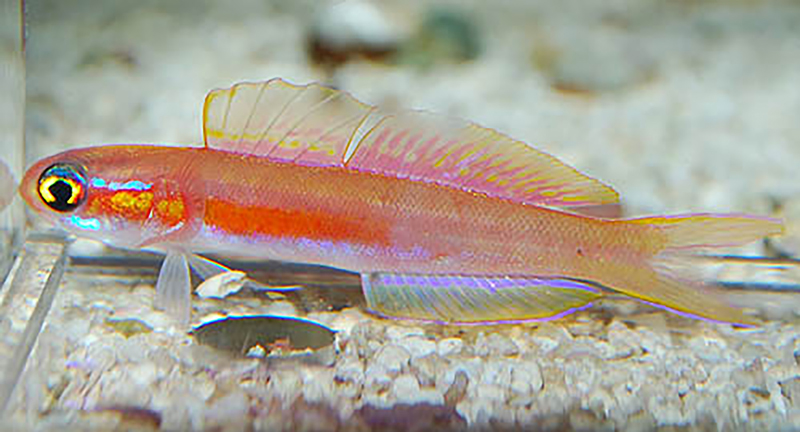 A similar looking species to Kaguya’s dartfish has been collected in the Maldives but in that fish the yellow dorsal fin spots are less separated and there is a prominent orange lateral stripe along half of the body. As the Navigobius genus becomes better understood and as divers venture deeper into tropical marine environments it’s highly likely that we will see more species described for this group.

Navigobius kaguya is described by Gill, Tea & Senou in the most recent issue of ZooTaxa.