Keeping nano reef aquarium with a volume of 29 gallons or less requires a special set of devices. You can’t just put up a full size light fixture over a ten gallon tank, or power it with even a smaller mag-drive pump.

The last decade has seen manufacturers begin to design and develop products specially suited to these smaller reef aquarium systems and today we’ve got a lot of selection to choose from. This list is definitely not absolute, or complete, but it does include ten of my favorite reef aquarium devices and products that really help make nano a heckuva lot easier. 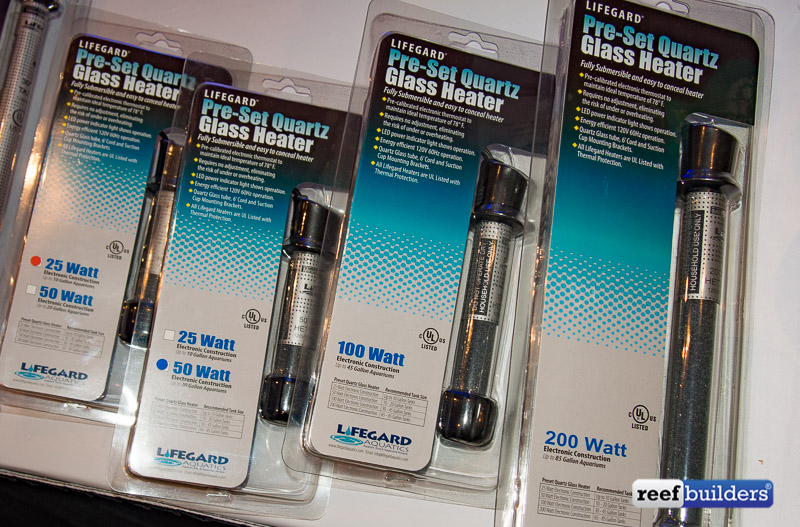 Preset Heaters – to be quite honest, there’s a number of quality preset heaters being made and offered by many different brands. None of them have any kind of advancements or competitive edge, but I personally prefer the stability that come from pre-set heaters, I feel like there’s a lot less that can go wrong compared to adjustable units. Eheim, Aqueon and Marineland all have small 25 watt and 50 watt models but I just happen to use the offerings from Lifegard.

The small size and discrete nature of the AutoAqua Smart ATO Micro is the undisputed leader in miniature top off switches. Together with its micro pumps, magnetic mount and ease of operation the ATO Micro is so good, we don’t even know how you could improve on it.

Despite turning six years old this year, the Eshopps Nano Skimmer is still one of the most practical miniature foam fractionators for reefers who have a nano tank sans sump. The included magnetic mount is pretty clutch for making easily adjusting this skimmer placement relative to the water level.

Eshopps nano skimmer is a big skimmer in a small body

The Tunze DC Skimmer 9001 is also a favorite for use in nano reef tanks. Even for medium sized tanks up to around 40 gallons this product will really deliver on some skimming performance. It’ll run circles around the Eshopps Nano Skimmer but it’s also considerably larger, and may obtrusive inside small volume tanks.

The Kessil A80 is truly the miniaturized heir of Kessil’s A160 and A360 spotlights. If absolute coral color is your aim, you could do much worse than the A80 and its small goosenecks further streamline the experience of installing, owning and using this light over small tanks.

If you want absolute control over color, intensity, and built-in timer functions the AI Prime HD is the absolute king of nano reef lighting. With 55 watts of power to draw from, the AI Prime HD is suitable for even mini reef tanks up to 20 inches cubed. Controlling this smart LED light from your smartphone works near flawlessly and it really feels like a slice of the future.

AI Prime HD with HyperDrive gives people the power back

The controllable Tunze NanoStream 6040 and to a lesser extent the 6020 are two great pumps for moving water in a tiny tank. The unique and innovative flow deflector produces complete yet gentle water flow throughout the entire aquarium without create too much turbulence in any area. The standard 6020 is a sliver over $40 while the controllable 6040  is a hundred dollars more, but both make great pumps for nano reefs.

Tunze NanoStream 6040 Review: the most features packed inside the smallest controllable pump

The Aqamai KPS is the “AI Prime” of controllable nano reef pumps. The Tunze NanoStream may be controllable, but the Aqamai KPS is also wireless and programmable to change flow speed, wave patterns and more through an app that gets better with every update. And priced at just $99, there’s a mountain of reasons this was one of the top ten products of 2017.

Aqamai KPS is a tiny controllable propeller pump from Hydor

What’s a nano reef tank if you can’t even see inside it? Tunze’s care magnets are some of the most thoughtfully designed for medium and large reef tanks, but their smallest include a $12 pico size and $20 nano size which are just unmatched at scraping tough algaes, getting really close to the edges of the glass, and they way they are designed is virtually impossible for them to pick up sand and scratch the glass.

Last on this list but certainly not least, you’ve got to build your nano reefscape up with something right? The 20lb box of nano sized Stax rocks from Two Little Fishies is a brilliant idea which is sure to be copied in the future. Bacteria grow fast, and using dry rock is the best way to start a new reef tank while minimizing ‘contamination’ from unwanted critters, algaes and even worms. This 20lb box of precut Marco Rock has plenty of shapes and sizes to arrange into your ideal aquascape in a nano reef.

Ask Reef Builders #2: Why do you believe pH is so important?