Sarcothelia aka ‘Blue Clove’ aka ‘Blue Anthelia’ is a gorgeous little coral that unfortunately, does too well in our aquariums. I still remember the first time some reefing friends and I discovered like three polyps that had hitchhiked on some other piece of coral, we were SO excited because it was BLUE! Fast forward ten years and this coral is now not only ubiquitous, but it’s practically invading some people’s reef tanks! 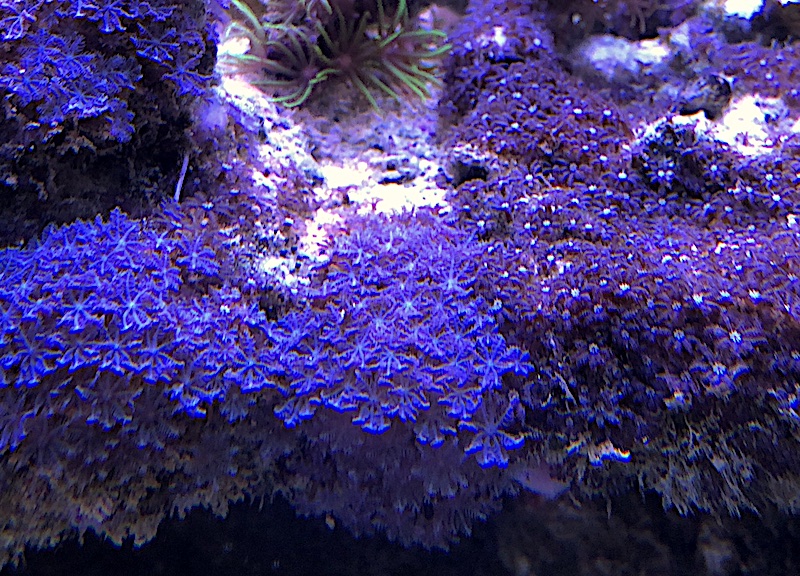 Not to be confused with slower growing Sympodium, the blue Sarcothelia polyps are often available as frags even though this coral can really do some damage to reef tanks. In a vacuum, these blue little snowflake looking polyps are absolutely gorgeous, but so is Aiptasia, and we don’t keep these reef critters in tanks by themselves.

We keep corals in vast reef tank communities populated by many different species and groups of animals. But Sarcothelia doesn’t recognize boundaries and it will encroach on every piece of coral, live rock, equipment and even clam shells. The big difference between blue polyps and Aiptasia is two-fold.

First of all, people are still buying and selling this little Trojan Horse of a reef pest – if you’re putting it into a nano or moderately lit reef tank that’s probably fine. But if conditions are right, there’s nothing to stop this little invader.

This brings us to the second problem with Sarcothelia, we don’t know how to stop it! Unlike Aiptasia which we’ve learned to manage with shrimp, fish, nudibranch and general exclusion from our reef tanks. But so far we don’t have any methods, to our knowledge, or eradicating this polyp once it’s established.

If you want something carpeting for your reef tank please, for the love of Poseidon pick up some green star polyps, or even small orange zoanthid species, because if they grow out of control they’re much easier to manage. I actually love the look of a little field of Sarcothelia, in someone else’s reef tank, but it comes with some cringe knowing that it will sting and suffocate any coral it can grow over.