Marine aquarists love their saltwater angelfish and we at Reef Builders especially love the hybrid angelfish specimens. The way they express the genes of their respective parent species can be highly varied, leading to unique and original color patterns that are rarely seen.

Although aquarium specimens of blue and queen angelfish may look similar at subadult sizes, when they are full grown they definitely look quite different. The Blue angelfish is mostly a pale brown with  yellow-edged tail and fin margins, with light blue being limited to the cheek and gill spines and breast, and it’s only when these fish are very large that they can develop a powder blue coloration all over.

Meanwhile the queen angelfish is clearly the most colorful of the two with shades blue to green scales, edged in yellow, hints of red and a bright metallic blue crown. But it’s the solid yellow tail that is the clear indication of a queen angelfish. However, over much of the northern caribbean it’s quite common to see ‘blue angelfish’ with a nearly solid yellow tail with a small crown on their forehead, and these are what were once described as Holacanthus townsendi.

Pygmy angelfish of the Centropyge genus very frequently hybridize but hybrids of the larger species are very rare, Pomacanthus crosses in both the Pacific, Indian and Atlantic Oceans are extremely rare and can fetch a high price with aquarium collectors.  But for some reason, the sympatric Holacanthus queen and blue angelfish seem to hybridize so frequently that they are commonly sold without recognition in the aquarium hobby.

Dynasty Marine, an established marine life collector in the Caribbean is one of the few suppliers we know of that regular list this hybrid for what it is. Reef fish surveys in the Caribbean and tropical western Atlantic have pegged the abundance of townsend angelfish as high as five to six percent of the total population, so roughly one in twenty Holacanthus on Caribbean reefs are this hybrid!

It bears repeating that while small and medium sized specimens of blue, queen and townsend angelfish look very similar but they develop their unique appearance with size and age. There is a certain excitement and anticipation to what hybrid angelfish will look like when mature, and this is certainly true with adult townsend angelfish.

They can range in appearance from solid blue queen angelfish with partial crowns to very colorful blue angelfish with an extra dose of yellow coloration. If you’re looking for a large personable angelfish for your aquarium but want something special besides the usual queen and blues, definitely consider seeking out the ‘first’ known hybrid angelfish, the Townsend Angelfish.

Big thanks to Dynasty Marine for the pictures, information and posting idea as the townsend angelfish is a very unique yet easily overlooked member of the wider angelfish family. 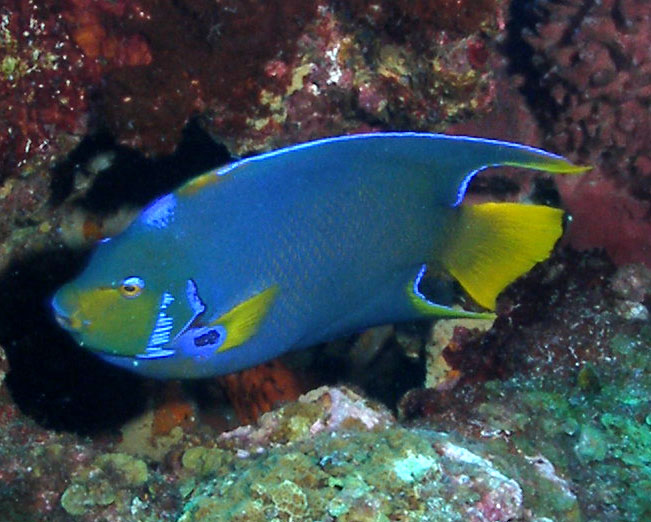