Five Reasons Sponges Are BAD For A Coral Reef Aquarium

Sponges are some of the most remarkable life forms that we can encounter in the ocean. These resilient and diverse ‘creatures’ are not quite single celled, not quite organisms, but colonies of single cells all working together.

The can be found from the shallowest coral reefs to the deepest hydrothermic vents, and there is no doubt that sponges are some of the most adaptable types of life living in seawater. We love sponges on their own as much as the next reefer or diver, but it is their versatility and tenacious nature that actually makes them a liability in reef and coral aquariums.

If you’re aiming for a full blown reef, especially an NPS setup that is geared towards non photosynthetic creatures then by all means go ahead and load it up with Porifera. But if your goal is really just to grow the best, healthiest and most colorful corals, you really should think twice about letting them get in your reef tank in the first place.

You’ve probably heard the fallacy that healthy sponges are an indication of a healthy reef tank, and while this has some truth to it, there are all kinds of ‘reefs’ in nature. In the Caribbean where sponges thrive and have huge diversity, the coral diversity and coverage of tropical reefs is actually low. This is in stark contrast to Indo-Pacific reefs where corals dominate, and sponges are only a supporting player. See the correlation there?

So if you’re all about having a wild and diverse ‘coral reef’ tank then knock yourself out, enjoy the fascinating nature and growth forms of sponges. But if you’re really in it mostly for the corals – that includes most of us – then here are five reasons that sponges are actually bad for an aquarium focused on keeping and growing corals.

One of the main weapons in sponges’ arsenal to compete on the crowded coral reef is that they are very toxic. Very few species of large angelfish, sea turtles and nudibranch have evolved to consume primarily sponges.

Like their bright red, orange and yellow colors indicate, sponges are known to produce some very toxic compounds. This is great for bioprospecting new medicines and researching potential cures to deadly human diseases but this is not so great for the confines of an aquarium.

Sponges are known to release compounds in reef water that stunts, kills and even induces bleaching in stony corals. Sure it’s probably no big deal to have a few small cute sponges in your reef tank and refugium. But a big population of sponges, mostly hiding where the sun don’t shine, and where you can’t see them, could be toxifying you reef aquarium water against conditions that our precious corals prefer.

2. Sponges COMPETE with corals for resources

Sponges in a reef tank concern us not only for what they release into the aquarium water, but also for what they take out. All living things need a basic recipe of essential trace elements and minerals and this includes corals and sponges.

Since they both adapted to live in seawater corals and sponges need the same suite of elements like iodine, strontium, potassium etc. to keep their cells alive and growing. Thankfully most sponges use silicate to build the skeletons so they don’t compete with corals as much on the mineral requirements for calcium, carbonate and magnesium.

If you thought competing with corals for the chemical soup that is seawater was bad, and perhaps harder to visualize, the way that corals overgrow corals is way more obvious. Space on the reef, and in our aquariums, is finite and limited.

When sponges do really well in an aquarium environment, they grow anywhere and everywhere. Sponges are indiscriminate about where they grow – we tend to think fo them growing mostly in the sump and nuder rocks but coral skeleton is equally suitable real estate.

Sponges love growing in the ‘shelter’ that corals provide, be it on the edge of LPS corals, within the branches of LPS corals like Caulastrea and Blastomussa. And you can imagine how devastating this is when sponges grow in the lower dead branches of birdnest and other SPS corals.

But what you might not know is that sponges can grow inside coral! These endolithic sponges can kill corals from the inside out – usually this is only experienced in colonies that have some wild skeleton with them, but it just goes to show you that sponges are not as innocuous as the seem. Don’t even get us started on photosynthetic sponges like chicken liver sponge that straight up grow right over all kinds of corals without discrimination.

Our aquariums operate in a delicate dance that requires a lot of moving parts to operate flawlessly. Any slight perturbations to the functioning of our pumps, valves and sensors can throw off the entire balance of the system, sometimes with only slight impairments and other times really throwing things our of wack. 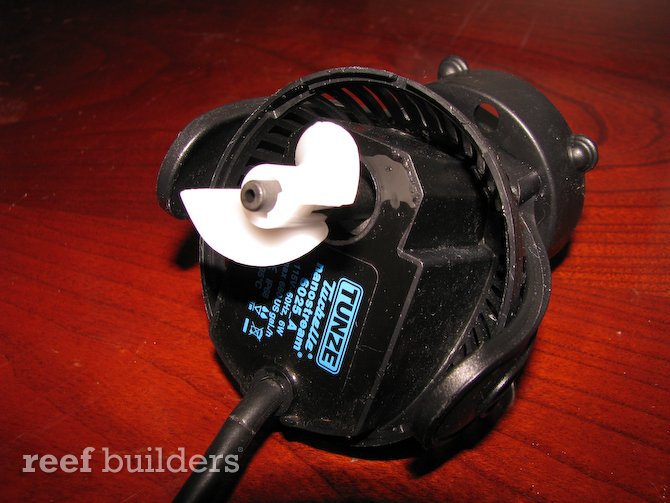 If you’re not already doing so, you really should be cleaning all moving parts of the equipment of your reef aquarium. The tolerances of pump impellers are very tight and will suffer a performance hit if anything hinders it. Sponges simply add to the biofouling that takes place from a wide range of life forms but their prolific growth can clog everything you can think of.

Clogged pumps, imbalanced needle wheel impellers, and clogged pipes can all lead to reduced performance from pumps, protein skimmers and it can prevent switches and sensors from accurately doing their job.

5. Sponges are a LIABILITY in any aquarium

By now you may be thinking that I have a grudge against sponges but in fact I have immense respect for Porifera. It’s not that I’m anti-sponge, I’m just so pro-coral that I don’t want anything holding back the health, growth and vitality of the corals I’m so focused on.

I do have plenty of sponges growing in my own reef tank, but I find myself removing and siphoning out loads of diverse sponges on a monthly basis. Sure little ball sponges are cute and interesting, but so many of the branching and encrusting species constantly creep up from behind and under the rock, continually encroaching on every kind of coral that they come across.

I love seeing impressive and unique sponge species while diving but in my reef tanks, I have an all out assault on removing and preventing sponges from growing in any way. Sponges are thoroughly scrubbed from new acquisitions and they are regularly removed any time I’m doing maintenance in the main reef tank. Removing sponges from the equation makes it that much simpler and straight forward  to zero in on the ideal environment for growing corals in an aquarium environment.

Come See The ReefBot by Reef Kinetics at Reefapalooza This Weekend!