Triton has become synonymous with ICP testing since they first introduced the concept to the reef aquarium hobbyist around the world half a decade ago. ICP testing has opened up a new frontier in our understanding of reef aquarium chemistry, but the method has its limitations, it can only measure inorganic elements.

This is great for testing elements like calcium, magnesium, zinc, copper etc., but it doesn’t tell us anything about the organics in our reef tanks. Organics – as opposed to inorganic elements, not the organic food you eat – are very important to understanding even more about the biology of growing corals, while balancing phosphate and nitrate levels helps us keep our tanks clean. 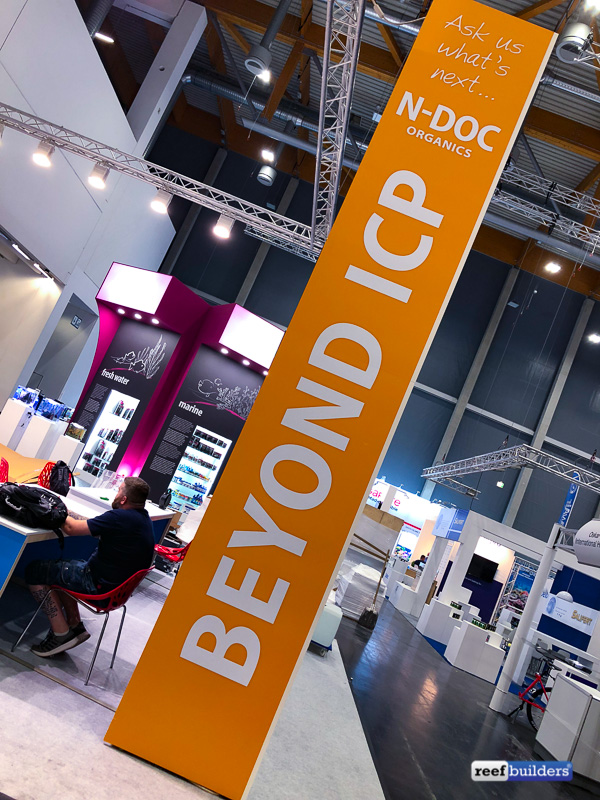 While InterZoo 2018 hasn’t officially opened, we did spot a couple things in the Triton booth as it was being set up such ‘Beyond ICP’ and a new line of additives called N-DOC Organics. We didn’t get to see the booth completed so the line could include Amino Acids, Nitrate, Phosphate or any number of organics, including one new spread of ‘Speed Carbons’.

These new N-DOC Carbons from Triton included interesting names like Carbon-Fast, Carbon-Medium, and Carbon Slow, no doubt describing the speed at which these sources provide carbon to the aquarium water. Reef hobbyists use a variety of different carbon sources such as vodka, sugar, vinegar, and methanol, each with different strengths and properties. We look forward to learning more about this new line of organic elements from Triton and especially what they mean by going ‘beyond ICP’.