Kobe Reef is a turbid sheltered reef slope located five minutes boat ride south of the Weda Reef & Rainforest dive resort. The reef is named after the local village ‘Kobe’ which is just in front of the reef.

Kobe Reef starts with a shallow reef top jam-packed with leather corals, soft corals, and brightly colored Acropora. As you swim towards the edge soft corals start giving way to large clusters of branching corals. The reef slope beings to drop starting from 3m deep depending on the tides. 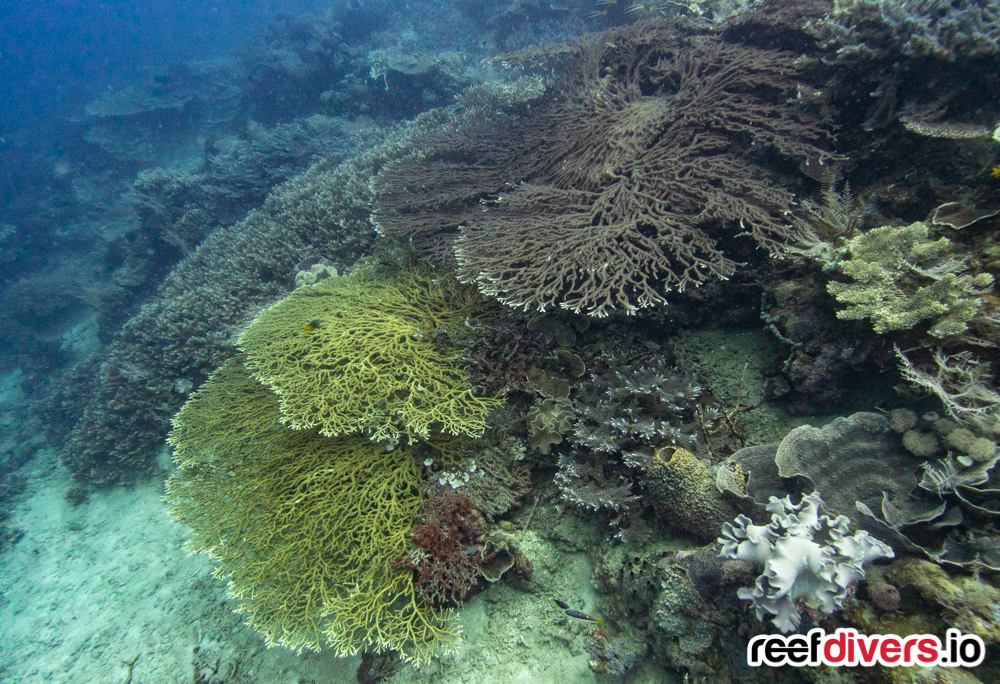 For about 5m you can find thickets of branching Acropora, and as you get below 10m you start to find plating Acroporas with some truly impressive Acropora plumosa colonies. Depending on where you start the dive these corals are near the southern end of the reef slope.

We started our dive more to the north and descended to 20m. At this depth, there are rocky boulders with smaller colonies of smooth, brown, deepwater coral species. I spent some time photographing these unusual corals before making my way up the reef slope to encounter the bonanza of plating Acropora elegans, and a rare thin branching Acropora darewanensis.

The Kobe Reef dive site is relatively close to shore, and you can tell it is often silty or clouded water because of the many plating species found between 10-15m. The corals are this depth spread out wide trying to capture as much light as possible. And because this area is protected with minimal storms, and very few divers, or boats to damage the delicate branches they have been able to grow to an impressive size.

It’s hard to get a feeling for just how big these corals are without a scuba diver in the shot or fish as a reference. Most of these tables where well over 3 meters in diameter.

But the most impressive of them all where the gigantic Acropora plumosa colonies. Colonies form plates with horizontal projections near the edges, usually in tiers as one section fans our wide before another vertical branch starts to form.


The colonies are attached in the center or near the side of the colony, and you have to wonder just how much something like this would weight. All plating corals, but especiallyAcropora plumosa has a very thick strong base, and it is constantly adding on new layers of tissue fortifying it’s hold-fast as the branches grow.
When a section of branches gets too big, or is knocked out during a storm, from animals, or worst by a human, it is still possible for that section to reattach and sometimes you will find smaller colonies of plumosa surrounding a larger mother colony.
These are impressive coral that you definitely can’t miss. If you are planning a trip to Halmahera for a coral spotting adventure make sure to visit Weda Bay and ask to go diving at Kobe Reef! Thanks to Weda Reef & Rainforest Resort for showing us around Halmahera.

New Ultrawarmth Base Layers Provide Comfort Beyond Your Comfort Zone