The Coral Beauty angelfish is one of the most highly variable of all pygmy angelfish species. Ranging from East Africa in the Indian Ocean to the Central Pacific Ocean, it’s no surprise that this fish has a huge number of known color forms.

One uniquely striped form from Mauritius was first described here on Reef Builders where is gained the common name of Tiger Tail Coral Beauty. The Tiger Tail isn’t rare in Mauritius but a recently collected bright yellow-orange specimen is very different from anything we’ve yet seen in Centropyge bispinosa.

But it’s not just the coloration of this orange tiger tail coral beauty that is unusual, as this fish also has a rather small, slightly droopy tail and a more rounded oval silhouette to the body. The most peculiar feature of this orange coral beauty is the presence of ‘preorbital spines’ underneath its eyes, a detail which is actually a trait of the Xyphipops subgenus of Centropyge of which two species also live in the East Indian Ocean.

The shape of the body, preorbital spines, funky color and even the reduced striping on the body certainly distinguish this specimen as quite an odd fish. It’s very entertaining to be an ‘armchair ichthyologist’ and speculate at the pedigree of the oddball fish that enter the aquarium hobby but in the end it’s just speculation and only the trained taxonomists are qualified to verify what’s really going on with this fish. 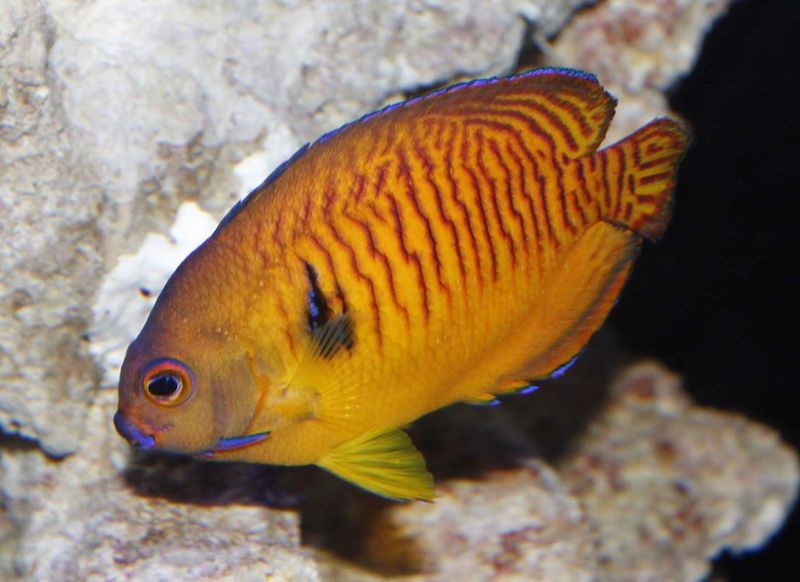 In either case, we believe that the orange tiger tail coral beauty from Mauritius is more than just an aberrant color form and we believe that it will keep its color in the long term. Big thanks to Koji & Blue Harbor for sending along these pictures and we really hope to see more from this very unique pygmy angelfish in its future aquarium home.