This past month we got a very important new window into the diversity of Symbiodinium including how long these dinoflagellates have been living in symbiosis with various groups of marine life. For over a decade Symbiodinium have been loosely grouped into ‘Clades’ with varying physical and molecular characteristics but mostly, various tolerances for bright light and water temperature.

A new paper by LaJeunesse et. al. has just described these loose clades into seven official genera representing the seven different clades from A to G. The research and systematics of Symbiodinium can get quite deep and scientific, but the official description of these Clades into their own genera finally sheds some definitive information about this diverse group of coral symbionts. 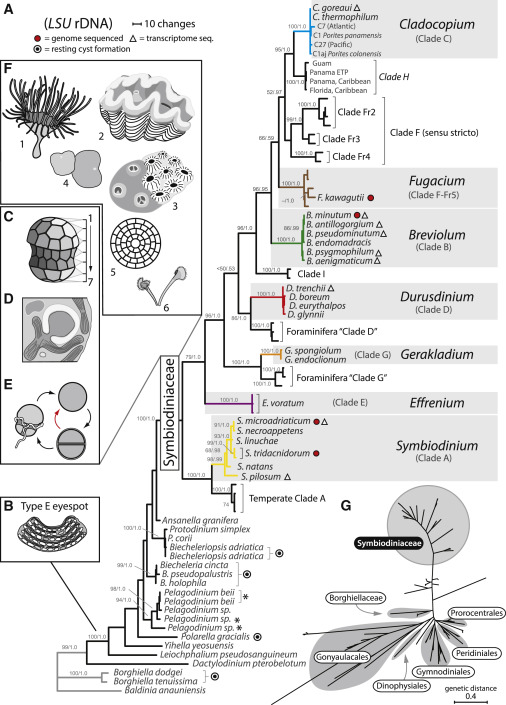 Symbiodinium is now limited to include only the zoox of Clade A, these are the classic high-light species which are associated with reef corals. Breviolum is the genus for Clade B, one of the smallest of the zoox and most commonly found in the Caribbean. Cladocopium is the genus for the generalists of Clade C which are found in a the widest group of reef animals including corals, sponges and clams,

Durusdinium is the genus for Clade D which have long been known to be the most tolerant to extreme temperatures and are most resistant to coral bleaching. Effrenium is an odd genus for Clade E which only includes one species which is not symbiotic but instead free-living. Fugacium is another odd group isolated from sub-clades of F and is most commonly associated with Foraminiferans. Finally, Grakladium is the oldest lineage of zooxanthellae and is usually found in boring sponges and black corals, but its ecology is still poorly understood.

One of the most important findings of the reclassification of Symbiodinium is the discovery that the oldest group is older than classic dinosaurs. This means that symbiotic corals have been around for 160 million years and survived many extinction events, and hopefully will find a way to persist in the rapidly changing world we see today. [Current Biology]

This is the Coolest Picasso Triggerfish Hybrid to date