The Crown Jewel of ANY Aquarium: An Overview of the Royal Gramma

This vibrantly colored fish makes an excellent addition to saltwater aquariums; it is hardy, and relatively low maintenance, which makes it ideal for both beginners and experienced aquarists alike.

The Royal Gramma (Gramma loreto) is a calm and rather shy fish, preferring to hide away most of the time in their cave. The Royal Gramma has a bright purple and yellow coloring which makes it stand out, and is one of the reasons they are such a popular inhabitant in most reef tanks. 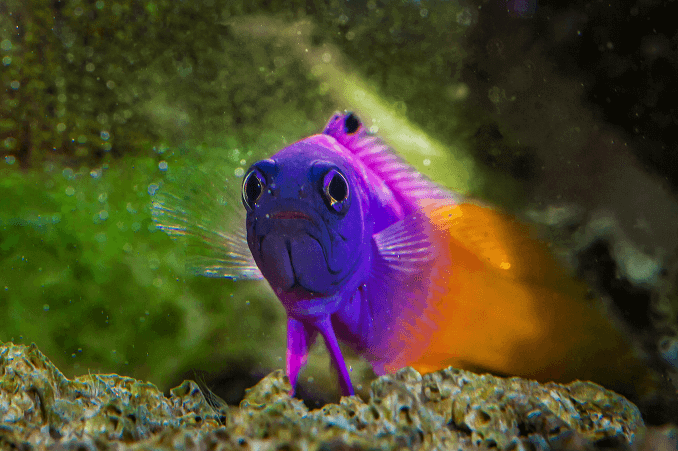 You can expect them to grow to around three inches long and live for around five years.
They are part of the Grammatidae family, which includes two genus; Gramma and Lipogramme. Grammas are all brightly colored and grow to between 2.5 and 4 inches long depending on the species.

They are sometimes confused with the Royal Dottyback, which is not ideal for beginners due to their aggressive nature. An easy way to tell the difference between the two, is to look at their coloring. Dottybacks have no blending between the purple and yellow, whereas the purple on the anterior half of a Royal Gramma gently fades into the yellow as it reaches the posterior.

The Royal Gramma, which is also known as the Fairy Basslet and the Gramma loreto, should be kept in a saltwater aquarium which is a minimum of 30 gallons. Ideally, you should try and replicate their natural environment when setting up your tank. They are native to the deep-water reefs in the Western Atlantic.

They can be found in the oceans surrounding Central and northern part of South America, as well as the Bahamas, Venezuela, Lesser Antilles and Bermuda. They prefer reef tanks and need plenty of nooks and crannies to hide in.

See also  The Crown Jewel of ANY Aquarium: An Overview of the Royal Gramma
”]

To achieve this, you can include live rock to build piles and caves, coral outcroppings and overhangs. Artificial rocks and caves can be used too if you don’t want to use live rock.

Royal Grammas should not be exposed to hard lighting – in the wild they’re used to living in deep water reefs. They are also known for jumping so you’ll need to ensure you have a well-fitted lid on your tank.

They are very friendly peaceful fish, so can be kept in community tanks with other fish such as Boxfish, Clownfish, Rabbitfish and plenty of invertebrates. Whilst they are usually peaceful, they can become a little territorial of their rockwork, they will chase fish away who come too close to their home. As long as tankmates are not aggressive, don’t share similar colorings and don’t view them as a meal – they should make a good tank mate.

Ideally, you shouldn’t keep them in groups, keep just one specimen per tank or they will fight for territory. If you do choose to keep a pair, make sure they are a male-female pairing, and provide them with a larger tank (at least 50 gallons) and plenty of rockwork to create their own territories.

In the wild Royal Grammas feed mostly off zooplankton and phytoplankton. They also act as cleaner fish – removing parasites off other fish. In the aquarium, they are not fussy and can be fed a varied diet of small meaty foods such as shrimp, flake and pellet food and frozen foods.

You should feed them once or twice a day, as much as they can eat in a 2-3 minute period. Give them shrimp and crab meat as a treat every week or two to keep them healthy and provide them with a varied diet.

These fish are quite easy to breed compared to other saltwater fish. Males begin the process by building a nest from small rocks and algae, and then courting will begin.
You might see the male and female locking jaws and looking almost as if they are jousting. This is quite normal, and usually happens in the few days before mating occurs.
Other courting signs to watch out for are the male having flared fins, arching its back and quivering its body. If this pleases the female, she will then lay their eggs ready for the male to fertilize. The eggs then stick to the algae and hatch within 5-7 days.

If you want to encourage breeding, you’ll need to include plenty of small enclosed areas for them, you could use a brick which has three small holes, or a long piece of PVC.

Royal Grammas make perfect fish for a beginner’s community tank; they are also very popular among more experienced aquarists due to their vibrant colors and peaceful attitude. They’re easy to care for and don’t have any specific demands, the only thing they do require is plenty of rockwork to hide in and feel comfortable.

You can buy a Royal Gramma for around $20, and they’re very affordable to maintain and feed.