Yellow Blueline Angelfish is Another New Strain from Poma Labs

Poma Labs has really been ramping up their line-bred angelfish releases with the announcement of their newest breakthrough in Pomacanthid genetics, the ‘yellow’ blueline angelfish. A normal blueline angelfish is a gorgeous tropical marine fish with a dark body, bright yellow tail, and a series of boldly patterned blue lines across the head and body.

The thickness and number of blue lines varies with the individual and where they come from and this is the trait that Poma Labs experimented with to create a very interesting new strain of Chatodontoplus septentrionalis.

“Blueline angels were one of the first species we had success with many years ago. We had several pairs of these amazing angelfish spawning, but surprisingly, we noticed very little variation among the offspring. After a few years, we found a pair that produced thin line and thick lined offspring. We raised these up and crossed the offspring.” 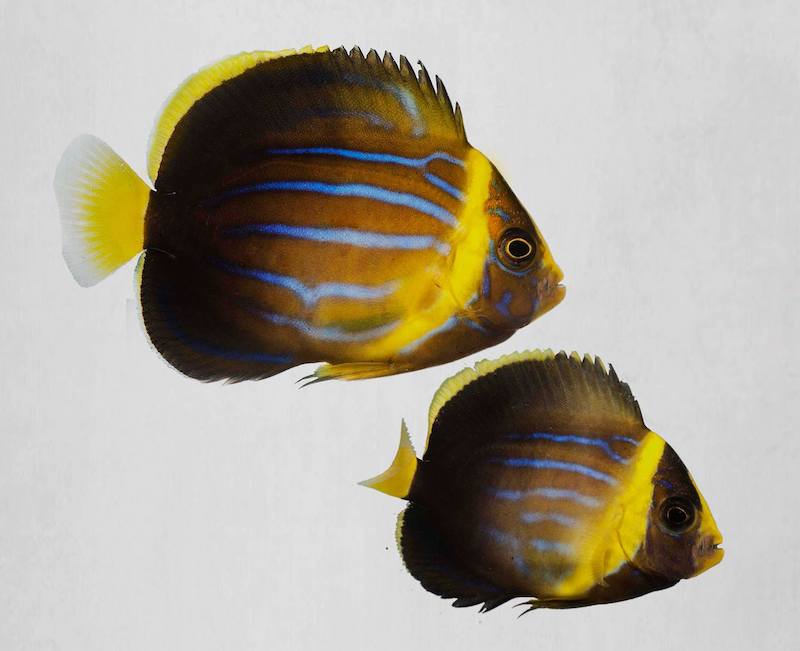 Even when they are young the blueline angelfish display a dark body color which helps to contrast their developing blue lines. The black eyestripe fades to brown and reveals the rest of the blueline pattern as it starts to show on the face. But this new third generation of captive bred yellow blueline angels are quite different from an early age:

“We found some pretty cool traits popping up, like blue pearl eyes and some wacky stripes along with a subtle shift in the background color. Then, in the f3 generation we found these. Yellow angels with little to no striping and a few with faint maze like patterns throughout the body.“

The most exciting part of this new ‘strain’ from Poma Labs is that we know the fish are special because they already look quite different as juveniles. But we don’t yet know what these fish will turn into, so it’ll be an awesome surprise for whoever gets these yellow blueline angels and grows them up first.