For the second time in a week we have a brand new species of goby to learn about, Trimma putrai from western Indonesia. Unlike the cryptic species Trimma christianeae, Putra’s pygmygoby is a very distinct looking species with beautiful coloration and markings.

The color of Trimma putrai is a reddish orange overall, but more solid around the head with two yellow-orange stripes across the cheek. The most prominent pattern is a series of seven large yellow spots in several rows covering the sides of the fish. The yellow spotted pattern only appears into the lower parts of the dorsal and caudal fins and there are very minute tiny white saddles at the base of the dorsal fins.

The species has been observed in Bali, Flores and Raja Ampat Indonesia with the basal coloration showing a varying degree of yellow, to orange or red. Juvenile Trimma putrai are mostly grey in body color making their yellow spotting appear much more distinct when they are small and young. This species is rare across its range and only known from relatively deep water at depths between 35 to 70 meters, or 115 to 230 feet, and outside the range of recreational SCUBA. [JOSF] 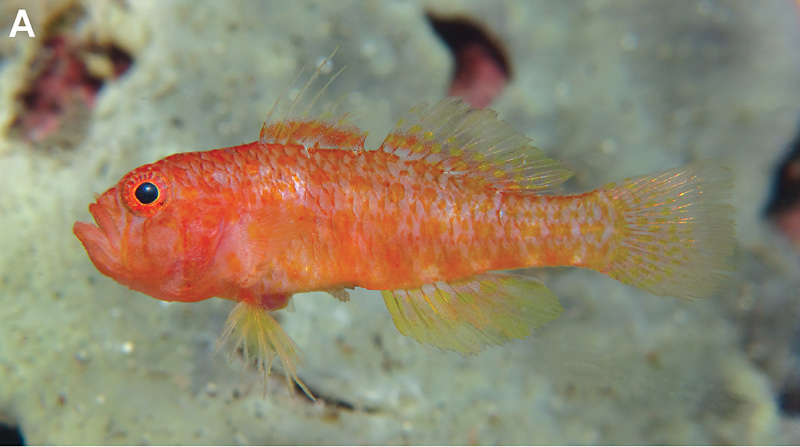