If you’ve ever been scuba diving around Malapascua, chances are you went to the Gato Island dive site. This small rock island offers a spectacular swim through but very few guides, dive shops or reviews of this site mention the immense amount of mushroom corallimorph which blanket the rocky walls outside of the Gato Island tunnel.
We were blown away by the diversity of corallimorphs mostly Discosoma species on this dive and asked to return for a second day just to document the site with both wide angle and macro lens. 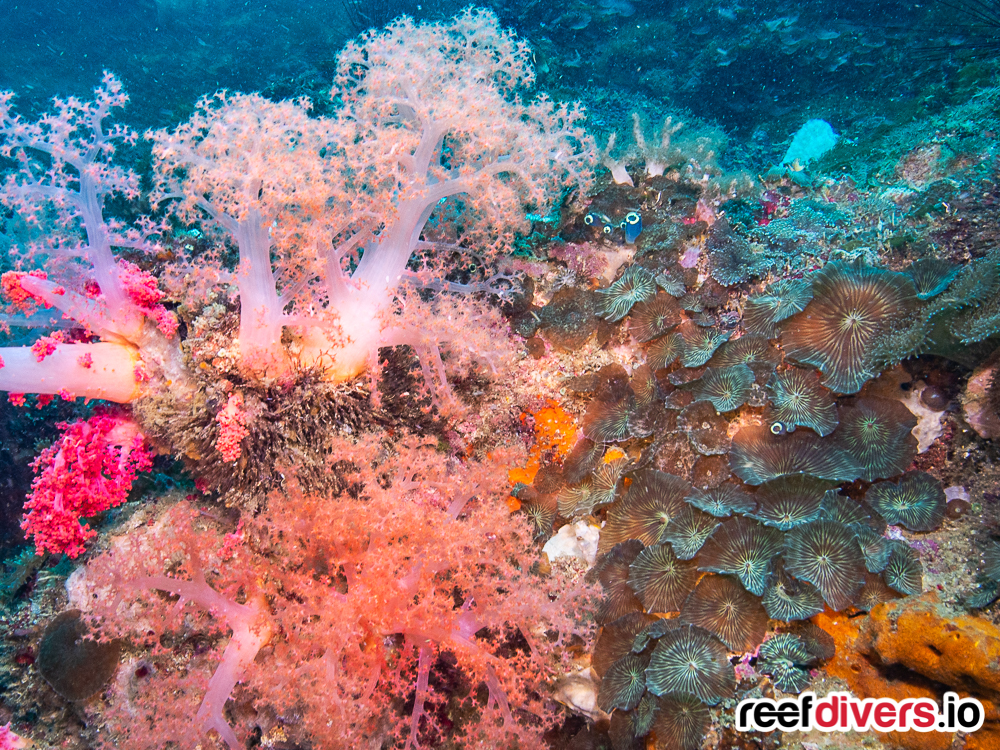 So what is a corallimorph?

Corallimorphs, also called Mushroom anemones, are marine invertebrates closely related to reef building stony corals. Corallimophs lack a hard skeleton and instead had a wide fleshy disc with a single mouth at the center.
Depending on the species they can have short tentacles on the exterior of the disk. Some of the disks are smooth while others have bumps, bubbles or knobs. You can often find many of these Mushroom anemones grouped together, and Gato Island seems to be a hot spot for this colorful corallimorphs.
Corallimorphs occur in a wide range of marine habitats and are associated with phase shifts in coral reef ecosystems that result in a change from a hard-coral dominated reef to a soft-coral dominated one.
We found at least five types of Corallimorphs at Gato Island, including Discosoma, Ricordea, Rhodactis, Metarhodactis, and Paracorynactis

Discosomas tend to be smooth with few vesicle or bumps covering the disk. Discosoma are photosynthetic and once established can spread and multiply quickly. The disks edges are generally smooth but the surface of the disk can have small bumps.

Rhodactis have more vesicles with a pseudo tentacle covering the disk making it appear fuzzy. The tentacles can be short or long, but always extend past the edge of the polyp disk. Rhodactis are photosynthetic and once established can spread and multiply quickly

Riccordea are covered in round vesicles giving them a distinct appearance. The Pacific variety of Riccordea can grow up to 5-7 inches in diameter. These corals have a bubbly texture and don’t multiply as quickly as Discosoma or Rhodactis.

Metarhodactis is a large disk anemone with a bumpy surface texture. The polyp grow into large disks which at times can have several months. Sometimes the polyps with two mouth will spilt off becoming two individual disks. The polyps grow close together and can be over 15cm in diameter. 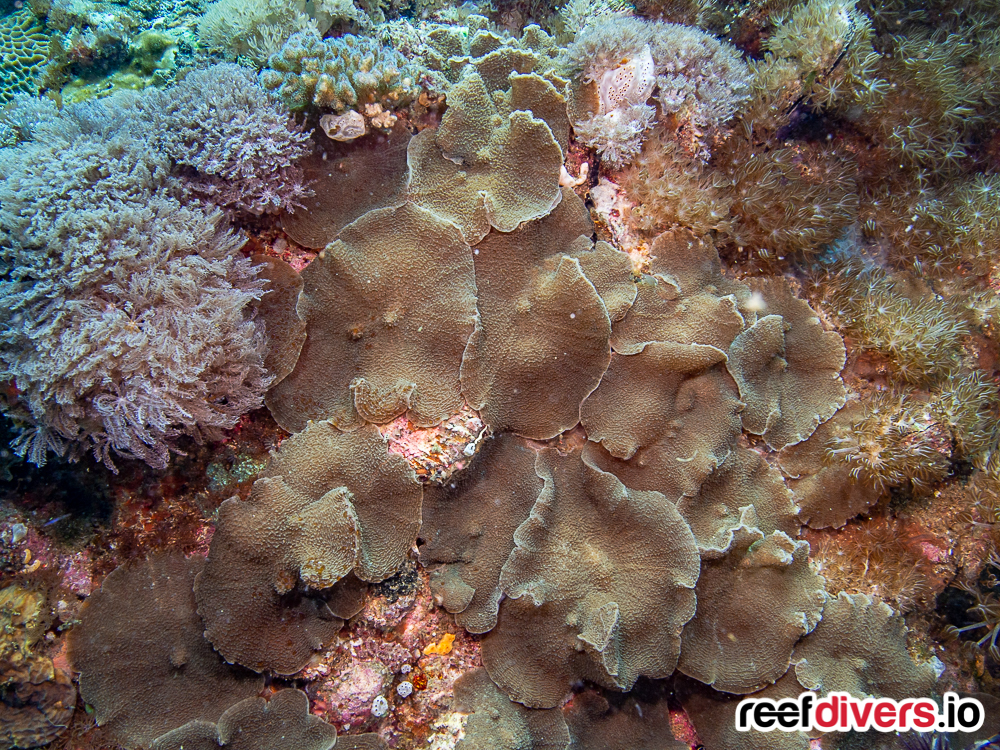 We also found the much larger corallimoph called Paracorynactis, (previously Pseudocorynactis) and through researching this article we found out an interesting fact. These large polyps can feed on starfish including the pradatory crown of thorns. 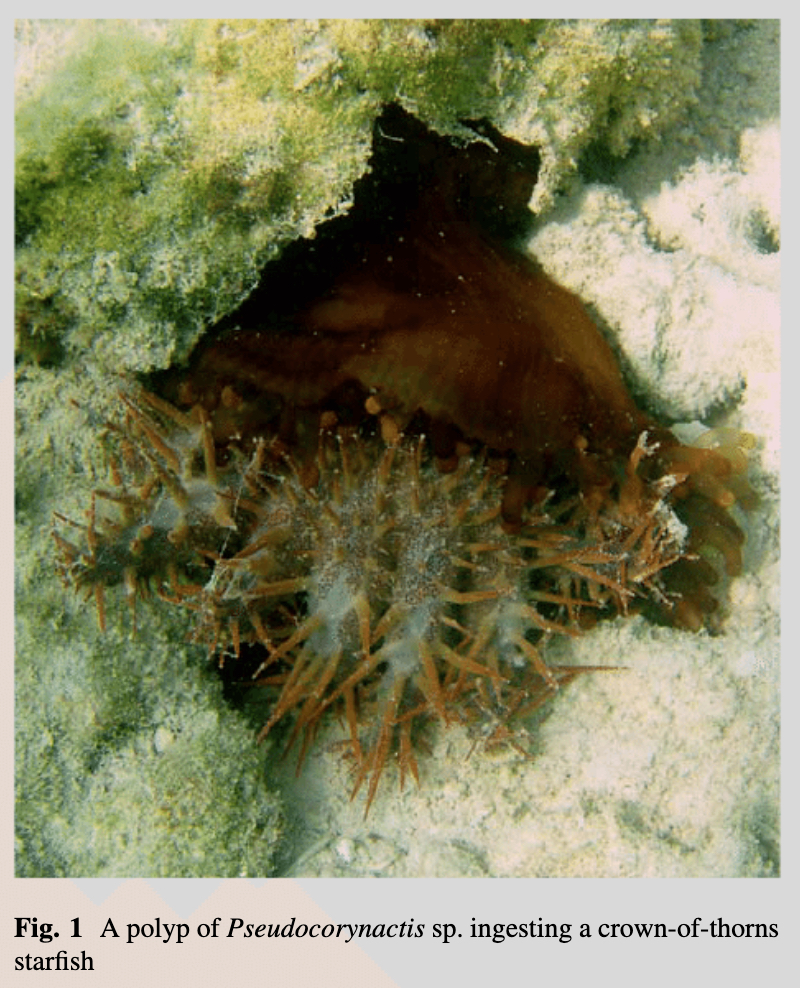 Polyps of Paracorynactis hoplites naturally prey on the crown-of-thorns sea star, Acanthaster planci. A polyp can ingest a sea star larger in diameter than itself: the larger the polyp, the larger the sea star it ingested. Researchers Bos et al. (2008a) observed polyps of Paracorynactis hoplites to prey upon specimens of Acanthaster planci with maximum diameter of 250 mm.
A newly discovered predator of the crown-of-thorns star?sh.

If you have the opportunity to dive around Gato Island don’t miss out on the incredible diversity of mushroom corallimorphs!
See also  I Got Stung By a Ball-Tentacle Shroom!