The recent parade of exotic angelfish continues with a very large adult hybrid Pomacanthus. The emperor angelfish is arguably the most popular and recognizable of all the large angelfish species in the Indo-Pacific, which is why fish fanciers really notice when it displays a remixed appearance.

What’s remarkable about this specimen is how large and mature it is – sometimes when hybrid marine fish specimens we only have enough clues from their appearance to determine the parent species, and can only theorize what their adult color and pattern will look like. But this huge Pomacanthus hybrid angelfish is pretty much full grown, with a unique appearance from the tip of its mouth to the end of its tail.

Everything about the hybrid emperor angel at Formosa Fish is unique; we love the olive green face with hints of blue outlines like a conspic, the very numerous and partially scribbled lines span the entire body and even into the tail a little bit. Even the body of this hybrid specimen is a little bit more angled or flared, especially towards the posterior where the dorsal fin flares out the way an annularis or koran angelfish is high-bodied. 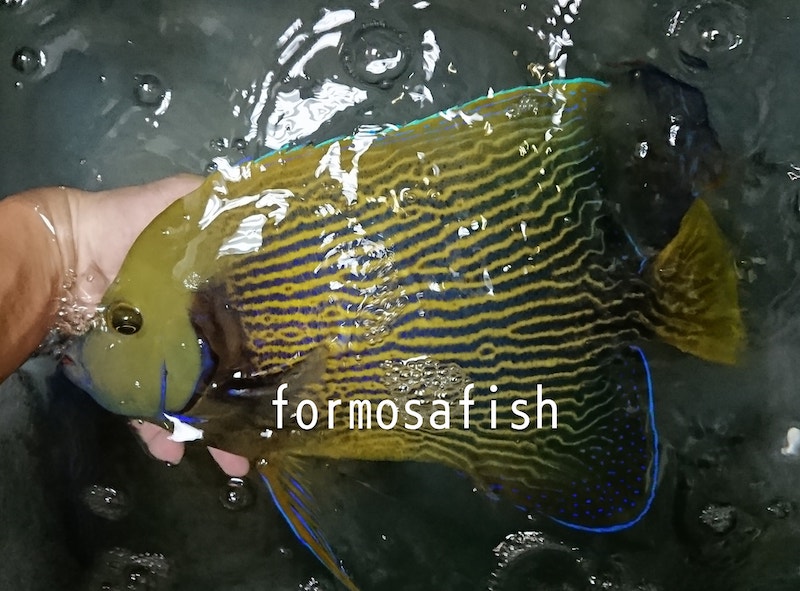 Formosa Fish really scored with the extra large and fully developed hybrid specimen of emperor angelfish and we sincerely hope there’s a perfect forever home in its future where it can continue to live the life of a show quality, baller angelfish.

May 20, 2019
Site Sponsors
Reef Builders is Supported by: