The Blakctip Snailfish is a Fascinating Deepwater Oddity

Besides live video from deep diving ROVs, specialty aquariums are the only way that the general public can ever hope to see and appreciate the bizarre marine life of the deep sea. The graceful blacktip snailfish is one such peculiar fish with fascinating appearance and behavior that can be appreciated thanks to advanced deep sea fish husbandry techniques being practiced at Aquamarine Fukushima. 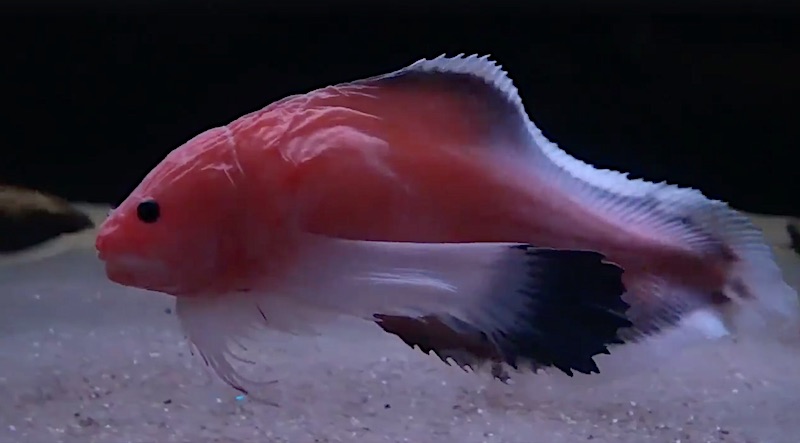 The blacktip snailfish, Careproctus zachirus, is unlike any fish that we keep in our aquariums today, except for the occasional brotulas. Any one of the blacktip snailfish’s features sound ugly when you describe them; wrinkled skin on the head, ‘shredded’ looking fins and a body coloration that can only be described as ‘flesh-colored’. But when you see this fish alive and in motion, its graceful movements, contrasting peach, black and white coloration and those pectoral fins that seem to go on forever altogether are incredibly striking.

A live snailfish is a completely different animal from the usual bloated, slimy mess of what’s left of a snailfish when they are brought up from the depths. Speaking of which, the blacktip snailfish lives between 200 to 800 meters, or between 650 and 2,600 feet and how you decompress a fish from such profound depths is a complete mystery. Another mystery is the very peculiar resting posture of the blacktip snailfish, which essentially curls up into a ball, free floating with its head down and a pelvic fin pointed up.

In these video clips shared by Tidalarium we can appreciate the live snailfish both in appearance and behavior, and marvel at the very cold, very specialized aquarium used to house this fish as well as a dumbo-style octopus. The next time we make it over to Japan we’re definitely carving out lots of time to visit the public aquariums of this country to really take in the super cold and deepwater habitats they recreate with displays of these very rarely seen marine animals.

Reef Fanatic Still Makes one of the Best pH Controllers

This is what a True Rainbow Symphyllia Looks Like