A few days ago I landed in the Solomon Islands, and while this destination is a popular topic on the pages of Reef Builders, in fact, it is my very first time visiting these far away islands! And, with well over a year of Indonesian coral spotting under my belt, it was about time I head off to explore the undersea world of a new country.

On my first dive, I quickly spotted a unique coral species. Looking like a mix between and Isopora palifera and brueggemanni, (which I just found out was switched into Isopora). 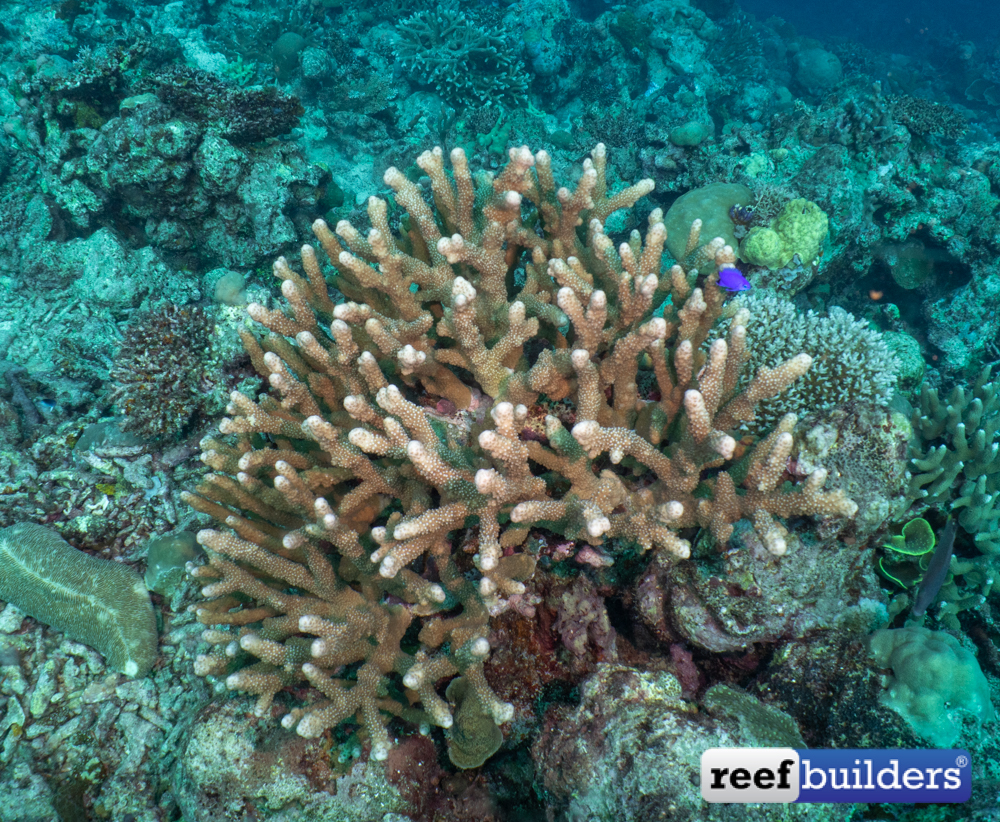 It was time to investigate! The uniform shaped round branches were different from the club-shaped branches of Isopora palifera, and they were much too large and wide to be Isopora brueggemanni. I knew this was a different coral but the best I could do underwater was document the find and review on land. After a quick scan of Corals of the World we were able to identify this coral as Isopora cylindrica.

All the telltale signs of an Isopora where there, small cup-shaped corallites close to the branch, and the lack of any distinct axial corallite. Although, this coral could fool even the most observant coral spotters.

Upon closer inspection, I started to find what I can only describe as false axial tips on some of the colonies. What was interesting is not all the colonies had these proto axial tips, but on the colonies which exhibited this trait, all the branches had the same characteristic.

As I swam around the reef I found a clear example of the smaller, thinner, branchier, Isposora brueggemanni growing next to it’s thicker look alike Isopora cylindrica.

Sure this isn’t an eye-melting, cherry bomb blasting coral, but nevertheless, I was just as excited to check off a brand new species on my corals spotting list!

I spent a good five minutes photographing the first colony I found… what if it’s the only one I thought! But sure enough, I found several other colonies on the dive. All these corals had the same brown beige color with branches around 2-4cm wide and up to a meter long. They were between 10-13m deep on the edges of a sloping reef pinnacle.

At first glance, these corals look strikingly similar. However, the coral on the left, Isopora cylindrica is uncommon outside of Solomon Island and parts of Papua New Guinea. Isopora palifera on the right is quite common and found throughout the Indo Pacific. Both corals have thick robust branches, however, Isopora cylindrica (left) has more narrow uniformed shaped branches, while Isopora palifera (right) has broad club-shaped fronds which are nearly twice as thick.

We spotted this colonies will diving at the Alice in Wonderland Dive site in Munda Solomons Islands. Diving with Dive Munda.

Additional photos below by Jake Adams

The Peppermint Angelfish at LiveAquaria

WATCH Premium Aquatics: From Edinburgh Indiana to the World