The sunrise hogfish aka Bodianus sanguineus has long been one of our favorite rare, deepwater, exotic hogfish species and in fact it was probably one of the first desirable hogfish species for aquariums. This hogfish, once known only from one photograph taken in a submersible in the late 90s is now available captive bred by Karen Brittain from Hawaiian Reefer.

The bright yellow stripe running through a bold red colored body is unmistakable in an aquarium and comparable only to closely related species of hogfish which themselves are also rare and live exclusively in deep reef habitats. One thing that makes hogfish such great aquarium fish is that they are hardy, get along with most commonly kept marine fish, they’re very active swimming around with a curious nature and they’ll eat all manner of aquarium foods. 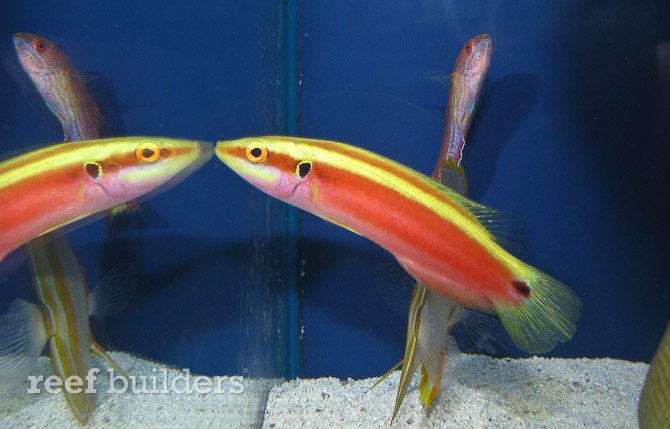 Mrs. Brittain has a long history of breeding and raising hawaiian reef fish, many of them for the first time and including such iconic and highly desirable species like the Masked Angelfish and Bandit angelfish. This new captive breeding success by Karen Brittain brings another illustrious deepwater Hawaiian fish to the aquarium world as a small, aquarium conditioned and captive bred specimens.

These small sunrise hogfish are only a couple inches long but at already over half a year old, the very long duration of their larval phase makes them a challenging species to breed in an aquarium. Wild collected Bodianus sanguineus are quite rare and expensive, but if you ever wanted a small sunrise hogfish you can get one, while supplies last, from Hawaiian Reefer for $3500.