Acanthastrea pachysepta is a reclassification of a coral that has stumped us for well over a decade. Formerly classified as a Lophyllia (which now includes all Symphyllia too), the majority of orange lobos exhibit a different color, pattern, morphology and especially behavior than any other typical Lobos.

Superficially, the coral formerly known as ‘Lobophyllia’ pachysepta looks pretty much like any other Lobo – it has typical one to two inch diameter polyps which are semi-circular, and occasionally grow out into meandering valleys just like a lobo. However this species never really grows quite as massively large as a typical Lobophyllia colony and they usually have a more lustrous, almost metallic quality of orange coloration that reminds us of another familiar coral, Acanthastrea. 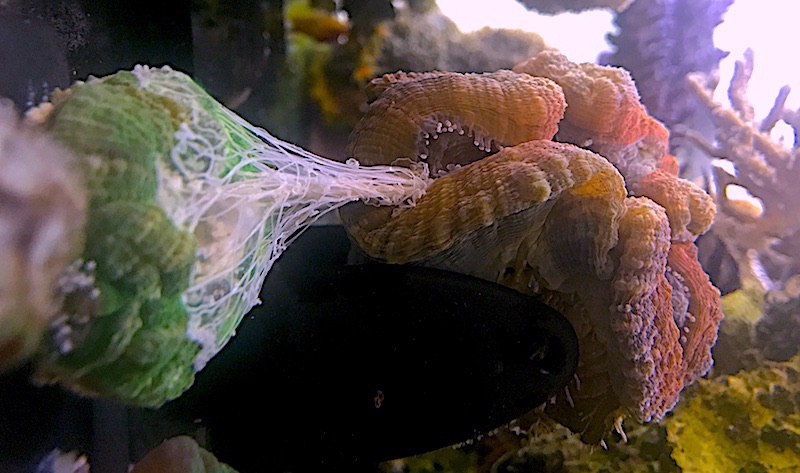 Coloration and basic appearance alone isn’t enough to really single out this coral, but one thing that is very different about these ‘orange lobos’ is their behavior towards oehr corals. Acan pachysepta can be a really Vicious Coral, killing and destroying neighboring corals and colonies of typical lobos, scolies, pretty much anything within their substantial reach, something that normal Lobophyllia are simply not known to do.

It doesn’t take a coral expert to recognize that these ‘orange lobos’ are not like the others and for years coral collectors and dealers have not not to group the orange ones with any others. True orange Lobophyllias do exist but doing a simple image search we noticed that most orange lobos are in fact the newly recognized Acanthastrea pachysepta.

By now you’re probably wondering how to tell the Acan from the Lobo and we’ll start out by muddying the waters even more. Not all Acan pachysepta are orange, they can also be red, brown, or green, but thing that seems to hold true is that they often times have prominent visible septa visible on the surface of the mantle as toothy projections.

This really explains a lot as we’ve struggle for years to understand how this orange LPS coral could be related to similar looking Lobophyllia but behaving so differently, especially in the aggression department. This new development in out understanding of the LPS tree of life is based on a new study of the Lobophyllia which concluded through morphological examination, and especially molecular analysis work, that “Lobophyllia pachysepta should be transferred to Acanthastrea“.

Oftentimes the taxonomic shakeup of certain corals simply do more to confuse what we should call a particular coral. However just like how the reclassification of Homophyllia and Micromussa lordhowensis helped us better understand how these corals are related, the clarification on the ‘Orange Lobos’ we now know as Acan pachysepta actually helps to understand which corals can get along, and which ones need a wide berth in our reef aquarium aquascapes. [EES]

Not All Wilsoni Corals are the Same