Acropora lokani is a very common deeper water Acropora that is common in Indonesia and widespread through the Indo-Pacific. The lokani Acro has been farmed by the thousands for many years, decades even, so in that time we thought we’d seen it all. It usually grows from 15 m (45ft) deep all the way down to over 50 m (150 ft).

Most of the time, colonies of Acropora lokani form table-like, side-attached corymbose cushions along angled reef slopes. It feeds by disrupting laminar flow, and catching falling particles so it usually prefers to be close to the bottom, and doesn’t like being elevated over the ground.

The coloration of Acropora lokani is usually brown center with deep purple branches that becomes brighter towards the extremities.

But last weekend we came across a shallow water colony, which is very rare. it was sitting on a ridge, well exposed into the flow and bright light, by just 10 m (30ft) of water. This rare shallow-water example of Acropora lokani displayed the expected colony shape, but the coloration as well is very different. 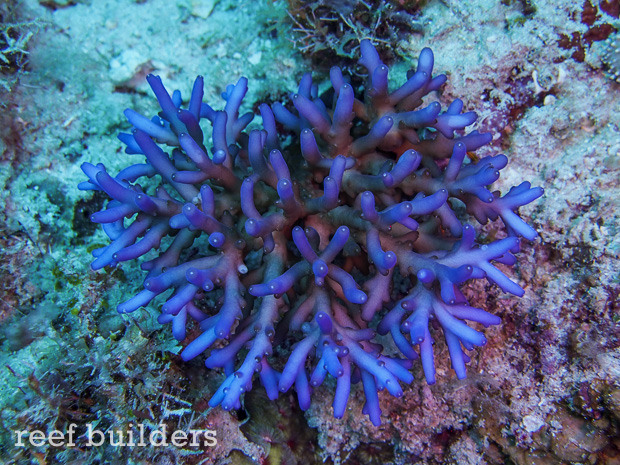 At first glance we thought it was a different species, may be some kind of Acropora rosaria, but after close inspection we recognized it as our old favorite Lokani Acro. That’s what make that particular species so particular; completely out of context. It also gives us an idea of what we can achieve to this species in reef tank, if we adapt it slowly to different conditions.

Instead of being table like, that colony of A. lokani was bushy and the purple coloration which is usually reserved to being on the tips were all over the colony as opposed to only on the plate edge. But another very important difference we noticed in this Lokani Acro was its adaptation to stronger light, with green tips filled with UV-absorbing fluorescent pigments, that are usually lacking in deeper water specimen.

The wonderful capacity of corals to adapt in certain cases to different conditions is what makes corals in general, absolutely fascinating. And this particular specimen of Acropora lokani is a very important one, as it has adapted to higher light, and warmer temperature. That particular high light, warm temperature genotype of Acropora lokani could be priceless in the future of climate change to preserve that species.

This Customized Bandsaw is Self-Cleaning and Flow-Through [Video]