Taking photos while diving with the artifacts of water color and turbidity makes underwater photography one of the most challenging tasks. Often times you either have to bring your own daylight flashlights underwater, and or correct the ‘white balance’ while editing the images topside. There’s a similar although more artificial problem in the reef aquarium hobby industry right now where coral vendors are intentionally introducing coral color flattering artifacts in the form of blue light, yellow orange camera filters, and blown out settings in photo editing.

This has resulted in some pretty dishonest, misleading representations of corals for sale, what corals and reef tanks can actually look like in real life – some Instagram pages and coral vendors are literally built on this surreptitious trick. Thankfully, a new tool developed by researchers to ‘remove water’ from subsurface photographs may both be able to dramatically help improve underwater photography, and might even be developed into a tool to re-balance oversaturated or ‘juiced’ coral photos.

Normally in underwater photos we would just white-balance a photo using a neutral black, white or grey chart or chip for a given depth, and this has been enough to correct the internal settings of a camera while diving. The ‘Sea-Thru’ algorithm was developed by oceanographers and engineers from Haifa university using Artificial Intelligence to basically remove the effects of water from underwater photographs. 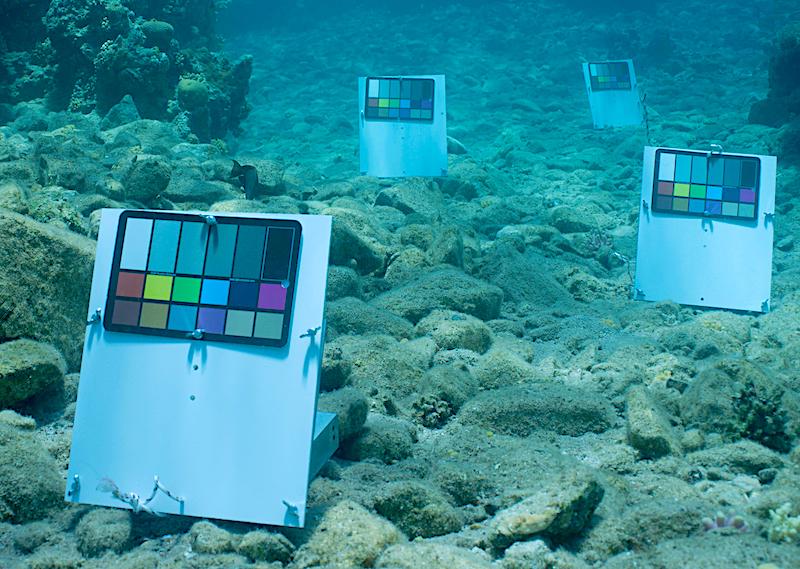 To work with the Sea-Thru algorithm a specialized color chart with precisely calibrated color and grey scales is included in a series of photographs. This is like white-balance but instead of just shades of grey it works as a built-in reference scale for most colors and shades of ROYGBIV. By taking a series of photographs with this color chart and plugging them into the AI powered algorithm the images are corrected as if there was no water present.

Not only could this new imaging technique be a boon to underwater divers and photographers, but now more than ever we definitely see a need for this kind of photo truth meter in aquarium coral photos. We’ve long used the apparent color of eggcrate or human hands as a kind of barometer or color reference in photos that are being offered for sale but this is not enough. If coral vendors included a color chip in their coral photos it could serve as a kind of ‘verification’ protocol that buyers could use to guarantee that What-You-See-is Truly What-You-Get.

For now the Sea-Thru AI imaging algorithm is only in the published phase so we’re a long way off from being able to use it in our own underwater photos or videos, let alone in casual use for aquarium coral photos. In the meantime, you can read our writeup on how to manually ‘reverse-photoshop’ oversaturated aquarium coral photos. [Computer Vision Foundation]