It’s been about six months since we first featured our very own soft coral reef tank and with the new Hydra 64HD on the market, it’s time for an update on both the corals and the lighting upgrade. The various branching soft corals, toadstools and couple devil’s hand corals have certainly come into their own and now it’s time to shuffle a few things around, and at the same time try out AquaIllumination’s new flagship LED light.

Besides the very healthy, fast-growing corals, the fact that this nearly 10 month old tank is virtually algae and pest free makes it an absolute reefer’s dream. In fact if there’s any issue at all with this soft coral reef it’s the speed at which the coralline algae grows – we attribute it to frequent additions of Lugol’s iodine – and the soft corals growing out of synch with each other.

So with this beacon of soft coral health, and let’s not forget a nice bommie of various Turbinaria and Duncanopsammia on the back wall, it’s the perfect platform in which to evaluate a brand new reef light from AquaIllumination. Since this tank’s been running a pair of Hydra 52HD it was also a prime candidate for reviewing the updates and upgrades that AI included in the new Hydra 64HD.

We already did a pretty thorough hands-on pre-review of the Hydra 64HD in the hardware of the light fixture so in this video we don’t dive too much into specs, but focus more on how the light compares to its predecessor. The performance of the Hydra 64HD is overall much the same – it has the same power rating but more LEDs and a much more uniform light distribution. 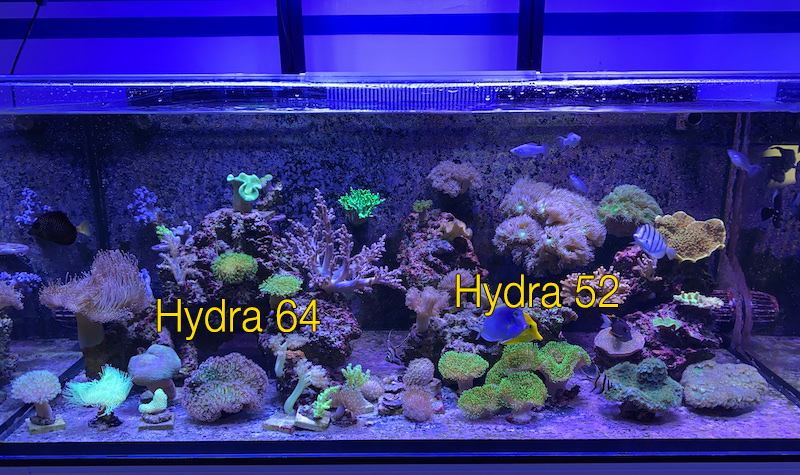 AquaIllumination is still busy working out some of the software controls like cloud connectivity, but the only real functional difference between the fifty two and the sixty four is the overall color. If you’re mostly rocking Windex blues you probably won’t notice a difference at all but at full brightness, the Hydra 52HD is a little bit warmer than the Hydra 64HD with the coralline appearing a familiar pink under the fifty two and more of a light purple under the sixty four.

This is probably a minor nitpicky detail that we wouldn’t notice if we hadn’t ran both lights side by side for a number of weeks, but like all new lights us reefers really get accustomed to the light we had. Now that the twin Hydra 64HD have been the primary light source on the soft coral tank for a while, what we notice most is the more uniform light from the front to the back of this 24 inch (60cm) wide aquarium – corals at the very front and very back are much better lit.

On a side note, since we’ve never had the option we all but completely spaced the built-in moonlight of the Hydra 64HD and we’ll probably be revisiting that in a future article.

The Classic Octo-Bubble Coral Finally has a Name