It’s no exaggeration to say that the new line of LED lights from AquaIllumination including the Hydra 64HD, Hydra 32HD and multitude of Prime 16HD variants are the company’s most powerful and feature rich to date. Aside from the completely redesigned cluster of LEDs, superficially the new Hydras and Primes look quite similar to their predecessors but there’s a lot going on under the hood that you may not find on the updated specification sheets.

From the hardware to the software, the increased light output, better color mixing, and especially the refined software all add up to a very sleek and modern reef aquarium LED lighting experience. We’ve gathered the top 10 new features of the AquaIllumination Hydra 64HD which mostly all also present in the smaller AI Hydra 32 and AI Primes.

The new LEDs of @AquaIllumination #Hydra64 are greatly improved with smaller chips, closer spacing and a whole new cluster lens. This is a whole new beast from the #Hydra52 and a very welcome upgrade, especially that #MoonLight channel. #aquariumlight #reeflight #reeflighting #HydraLED #LEDlight

2. Red Sea Mount – The Hydra 26HD traveled the world bundled with Red Sea’s line of Reefer all in one aquariums so there’s a whole ‘generation’ of reefers already using them on their tanks. In order to make the upgrading process easier, the Hydra 64HD as well as the new Hydra 32HD now also boasts the same mounting holes in the heatsink to make it compatible with the Red Sea Mounting Arm.

3. Attached Power Cord – This improvement seems like a no brainer in hindsight, that having the power connection directly on the fixture, above the water, was probably not the most robust design choice. In order to combat any potential moisture problems, the AquaIllumination Hydra 64HD now also has the power cord attached directly to the fixture, with the connection further upstream of the power supply.

4. Repositioned power button – Another design feature which wasn’t the most convenient in previous gen Hydras was having the status indicator light and control button on the back of the fixture. The control button and status indicator light are now integrated into one and are located on the underside of the fixture, making both access to the button and view of the status of the light much more accessible.

5. Increased Water Resistance – Taken altogether the slimmer fixture, repositioned button, attached power cord, and even the way the ‘face’ is attached to the main heatsink have all been redesigned with improved water resistance in mind. Due to the fan required to cool them, none of the flagship LED reef aquarium lights are waterproof per se, but it doesn’t hurt to make sure these lights are tougher against water and moisture with every iteration. 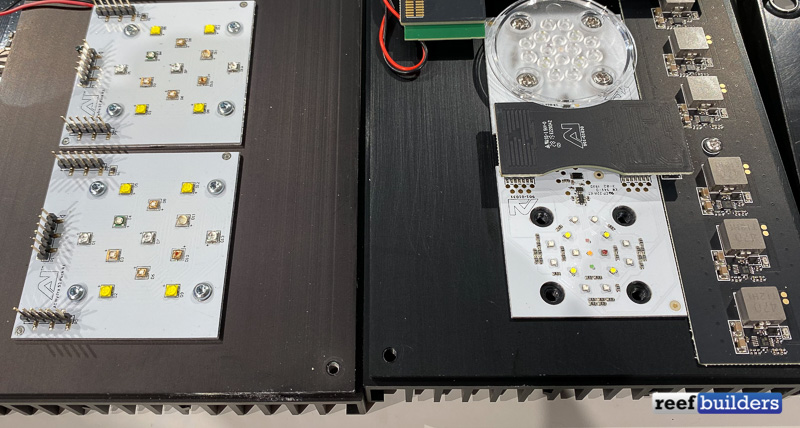 6. Upgraded Internals and Processors – One thing that is impossible to spot without opening up the fixture of the AquaIllumination Hydra 64HD is that it has completely upgraded electronics inside. Everything from the microprocessor to the drivers and even the wireless chips are all the latest and greatest, which means that this light will be able to connect through other channels besides bluetooth or wifi.

7. Near instant startup – All that upgraded silicon is not just for show, the faster processor and newer wifi & bluetooth radios means that you’ll be able to access the light even faster, get online, programming and controlling faster, so you have more time to either tweak the color channels and spectrum or to enjoy your reef tank.

8. MORE LEDS!!! – It would be hard to miss that, as the name implies, the new AquaIllumination Hydra 64HD has more light emitting diodes than ever before. Using the same LED cluster across the entire line, AquaIllumination has added three more diodes to each grouping than before. These LEDs are very small, but very efficient, and also brighter generation of diodes that are run at a more efficient current, making the new generation of AI lights absolute beasts of light output.

9. Dedicated Moonlight Channel – You could always lower the power of any channel in AquaIllumination’s line of LED lights so dim that they functioned as a moonlight, but now there’s a dedicated moonlight LED and channel. Curiously, this moonlight channel is of the warm white spectrum, same as the actual sun and the light reflected off the moon for a truly natural ‘crepuscular’ replication of what moonlight actually is, but these small moonlight LEDs are not included in the final LED count because Hydra sixty eight just doesn’t have the same ring to it as the Hydra 64HD.

10. Better color mixing – Perhaps the most consequential result of these more numerous and smaller LEDs is the ability to group them more closely together. With the light coming from a greatly reduced surface area clustering the LEDs in 25% of the previous spread means that color mixing should be one of the best ever, shy of having an actual multichip LED. Sure the red and green diodes will probably still stand out to some degree but the ‘disco ball’ effect should be so reduced that it’s practically unnoticeable.

About this time last year when all of the attention to AquaIllumination’s newest product was focused on their then-brand new Nero 5 internal water pump, we were wondering how the Hydras and Primes could be refreshed with a compelling design and new features. After writing out this list it’s safe to say that the newest generation of AquaIllumination’s Hydra 64HD, Hydra 32HD and all the Primes are a truly a worthy upgrade and should be a worthwhile investment for many years to come. 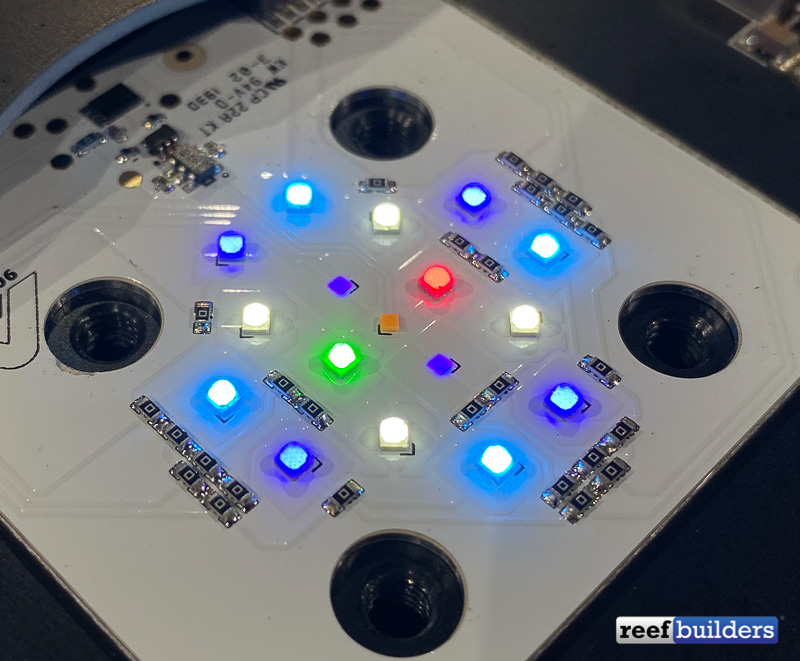 These Cute Monster Eggs are from the Psychedelic Frogfish