Biota Swallowtail Angelfish is Growing up into a Beauty!

It’s been almost half a year since we first received our captive bred Biota Swallowtail Angelfish and we’ve been wanting to tell you about how this little fish has really captured our attention. Of all the angelfish groups, the swallowtails sometimes get the least amount of attention which is a shame because they are very unique in their appearance and behavior, and are also the most reef safe group of angelfish in an aquarium.

At barely half an inch long when it first arrived, this teeny tiny little Genicanthus melanospilos is among the first ever of its species to have been grown and cultured outside of the ocean. When we first added it to our 40 gallon LPS aquarium it was so small you practically had to look for it, even when it was out in full sight it was sometimes hard to spot. Five months later the cute Biota Swallow is approaching 2.5 inches long, tail and all and is now impossible to miss! 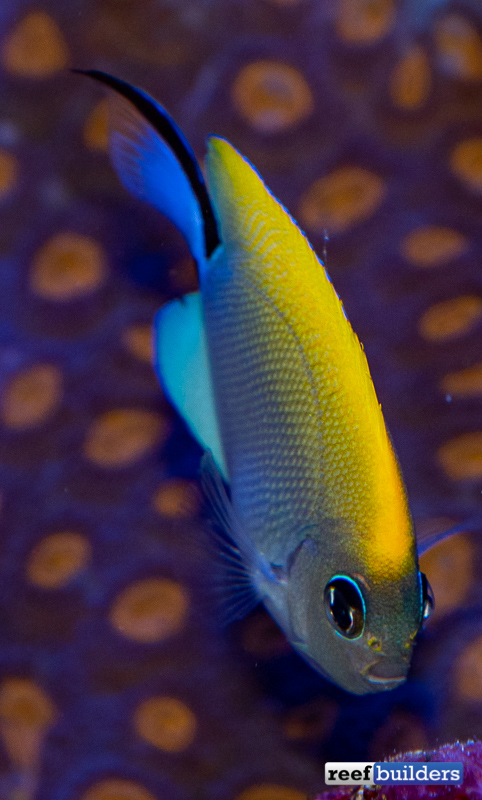 Large female specimens of the black spot swallowtail angelfish are commonly available from the Philippines and Indonesia but it is widespread and can be found over a wide range of the Indo-Pacific region, including Palau where our little specimen is from. We’re not sure why, if it’s an artifact of captive breeding or a trait of blackspot swallowtail angelfish from Palau, but the dorsal region of our specimen is incredibly bright, much more vivid than we usually see in wild caught G. melanospilos. 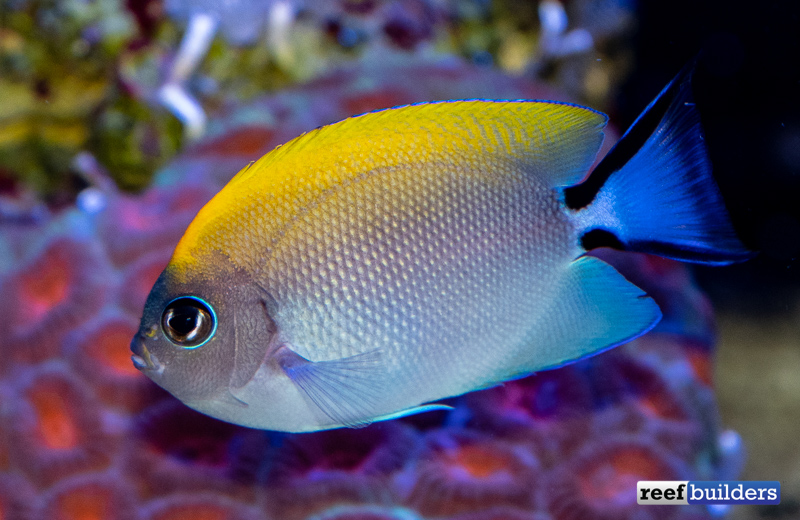 When the lights are on full brightness and color the Biota Swallowtail angelfish is a light sky blue fish with an eye-catching tail but when the lights are blue and becoming dimmer, the color of the Biota swallowtail has a different appearance, with mostly the bright yellow top visible as well as the bright blue ring around the eye. We didn’t suspect that we would come to enjoy this captive bred Genicanthus melanospilos from Biota Palau so much but now that we have, it’s really inspiring us to look at creating harem groups of Genicanthus for some of our other reef tanks as well.