Micromussa amakusensis, was once a regular import from Indo and Tonga, and now that Indonesia has reopened for wild coral exports, we can expect to get our hands on a few of these amazing corals again. In general the ‘classic’ Micromussa may not be as colorful as their Australian bigger cousin, Micromussa lordhowensis, but their coloration is still very nice, and gave way to some very popular corals such as the UFO Micromussa.

Micro Lords, and M. amakusensis, are very similar in appearance but the difference basically just comes down to the size. Polyps and corallites of M. amakusensis are about half the size the one of M. lordhowensis. Some other key traits to look out for is that the Classic miniature Micromussa generally has a smoother texture to the polyps, and while colorful don’t trend towards having any stripes or much of a pattern at all.

Colonies of Micromussa amakusensis are encrusting or submassive. They are cerioid with neat angular corallites up to 8 millimeters diameter. The corallites of Micromussa share walls, and have septal teeth visible through tissue. Septa have 1-3 large teeth. Colonies have a thick fleshy mantle usually covered with fine papillae.

This species is pretty common on the southern cost of Indonesian islands exposed to huge Indian Ocean Swells. But most authors qualify it as very rare.

Veron even describes its habitat as protected reef environment and it’s obviously not the case. I case exploring these very particular habitat is quite challenging. And as often in corals, it takes to look at the right place to find the right coral.

The exact habitat of this species is almost impossible to re-create in an aquarium but fortunately this species is quite adaptive and forgiving. Obviously as much light and as much flow as possible is the best, but it will satisfy itself to medium to high light and flow which is also probably more of a sweet spot for captive conditions. It’s capable of catching heavy prey that happen to drop on them, and tend to grow a lot faster when provided with regular meaty feedings. 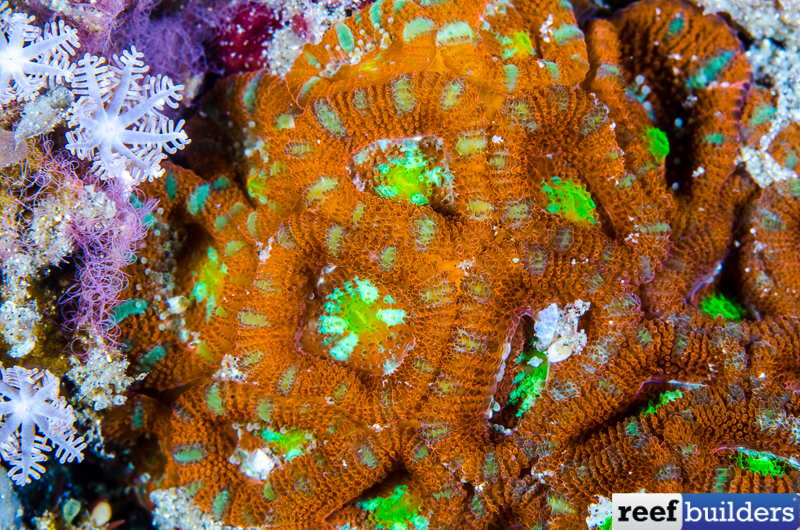 Like the lords, M. amakusensis is an heavy feeder, and will grow a lot faster with regular meaty meals.

The most common coloration of classic miniature Micromussa is usually brick red, with some white/blue/green stripes on the septal disc. They often harbor a contrasting oral disc, sometime very brightly colored with yellow like for the popular UFO or green. Some colonies are green, but they are not very common.

Have We Reached 'Peak LED' With this 1500 Watt Multichip?