Earlier this month we wrote about a recent bleaching event in Australia. This is the third widespread bleaching event in five years, and firsthand account from Ultra Coral Australia, describes this year’s event as the most severe deepwater bleaching they have ever seen.

Now, an ambitious “cloud brightening” experiment has been carried out over Australia’s Great Barrier Reef. Scientists hope this could become a futuristic way to protect coral reefs. 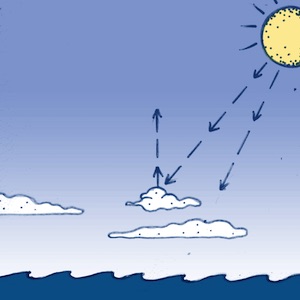 Cloud brightening, also called Marine Cloud Brightening refers to manipulating cloud cover to reflect more sunlight back to space. Cloud brightening could help reduce the temperature of the oceans by reflecting light and reducing the amount of sunlight absorbed into the water.

To create these whiter brighter clouds, researchers used a boat-mounted fan similar to a snow cannon to shoot salt from seawater droplets into clouds. This increases cloud condensation nuclei (the tiny particles around which clouds form).

Results from the trial were “really, really encouraging”, the project’s lead scientist Daniel Harrison from Southern Cross University said. Harrison stressed that despite the success of the experiment, at least four years of further research would be needed to prove the theory.

The experiment was carried out by the university and the Sydney Institute of Marine Science late last month, just before a comprehensive scientific survey found that the reef had suffered its most widespread coral bleaching on record.

To have a significant impact on the reef, a full-scale experiment would need to be 10 times larger, involving the use of several big barge-mounted turbines, Harrison said. But, he added, “If it works as well as we hope then maybe we could reduce the bleaching stress by about 70 per cent… potentially nearly all of the mortality.”

He also said the effectiveness of the cloud-brightening technique would drop significantly as the ocean warms further. That means the process would be similar to putting the reef on life-support while the underlying challenge of climate change was addressed.

“If we keep going on business-as-usual-type emission scenarios, then at most this technology can just buy a couple of extra decades before we see the complete loss of the reef,” he warned. [SCU]