Making up for water lost to evaporation is probably the most immediate and frequent ‘chore’ of any aquarium, and since it’s such a simple action it’s one that most aquarists are happy to automate. The need to keep liquid reservoirs at a stable level is pervasive throughout industry and commercial applications hence there are countless ways to perform this function through the use of float valves.

In the earliest days of employing sumps as the primary method of filtration on our reef tanks, $5 float valves and lesser known DIY ‘glug jugs‘ were the simple, automatic way to keep water levels stable. Even as recently as 2013 Eshopps offered an add-on float valve solution for simple automatic topping off of aquarium water, but for some reason the hobby has mostly followed the lead of the aquarium industry.

Aquarium ATO kits are way more expensive – around $69 and up – way less reliable, and really only fill a niche on tiny nano reef tanks with no room for a float valve, or in situations where it’s not feasible to place a reservoir higher than the aquarium sump. A typical electrical/electronic aquarium ATO kit consist of a float switch, a feed pump, a small controller, and some kind of power supply to make it all work, but also leading to unnecessary complication and multiple points of failure – tales of ATO systems sticking on or off leading to issues or tank crashes are all too common. 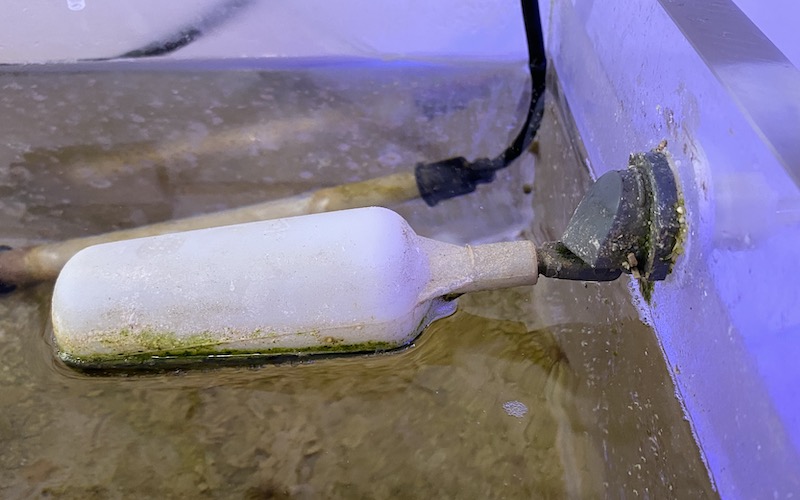 It’s for this reason that we only employ gravity float valves – no less than eight of them – with a common reservoir across the entire Reef Builders Studio, and most recently on our saltwater fish aquarium. It would have been much easier to install the Gravity ATO on our brand new Reef Octopus 36″ Sump before getting it all running, but we wanted to package this easy add-on accessory into its own video.

With a very tight fitting lid, and running no more than 75 degrees in temperature, the saltwater fish tank evaporates very little and we estimate that we could be refilling the ATO reservoir every two months, stretching into three months during more humid summers. This simple upgrade will allow us to spend more time observing and enjoying our pet fish, and also should segway very well into our next DIY/Sumpgrade topic of building the Automatic Waste Collector on the fish tank.