The yellow-ear and griffis angelfish are two species of Apolemichthys that don’t get much love with the fish fanciers but a new captive breeding first is sure to turn things around. Yet again Bali Aquarich has captive bred an exciting new hybrid and this time the resulting creation is a fish with a wildly exciting pattern.

The yellow-ear angelfish, Apolemichthys xanthotis is an interesting species from the western Indian Ocean and primarily the Red Sea with a light body color ringed in a dark black outline. Meanwhile the Griffis angelfish, A. griffisi is a light blueish color overall with a dramatic black black & white stripe-wedge across its body and they are only found from the central Pacific Ocean.

These two angelfish would never encounter each other in the natural environment so the world’s first hybrid of these two fish could only have been possible with captive aquaculture, and it’s no surprise that this occurrence transpired at the mixing pot of Mr. Su’s fish farm. The young hybrid yellow-ear x griffis hybrids are still small but they are already sporting some radical, bold black patterns that give us no indication of what these fish will look like as they grow out. 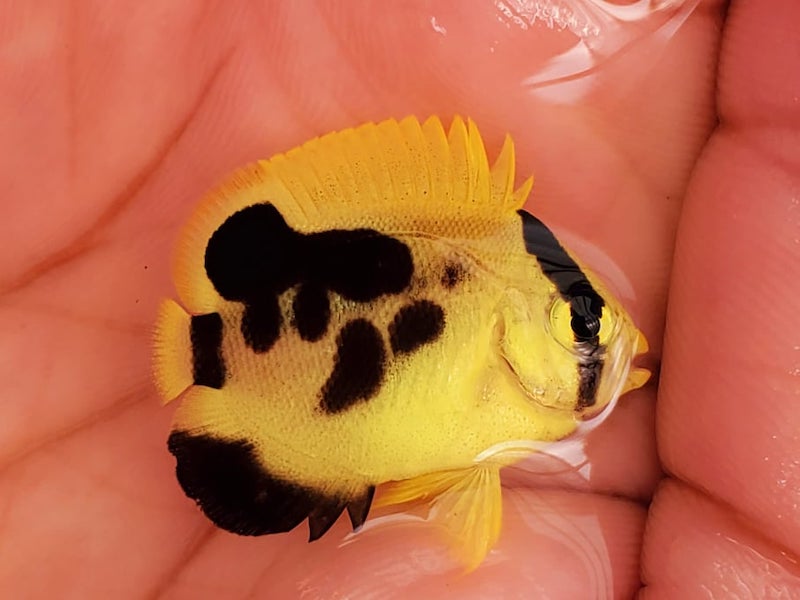