The CoralVue Hydros Wireless Feeder is a new aquarium tool that delivers both convenience and a very attractive price. This wirelessly connected feeder is part of the Hydros ecosystem of connected aquarium devices and accessories but compared to the next controllable feeder, it’s almost one third the price and doesn’t require a four hundred dollar controller just to work.

By and large the automatic fish feeders for aquarium use have stagnated in the features they offer and they’ve especially lagged in catching up with the smart functions and wireless connectivity that nearly all other aquarium devices have been blessed with. We thought that the Tetra Connect automatic feeder would be the first truly smart, wireless automatic fish feeder but it’s just taken way too long to come to market and now that it has it’s no longer price competitive.

At only $35 the Hydros wifi fish feeder is a very compelling option to automatically feed your fish and change the programming on the fly using the Hydros app. The body of the Hydros wifi fish feeder appears nearly identical to one of the most popular and widely used feeders of the last 15 years from Eheim; this might signal a lack of creativity of design but it also means that many aquarists will be inherently familiar with the way it dispenses food to the aquarium. 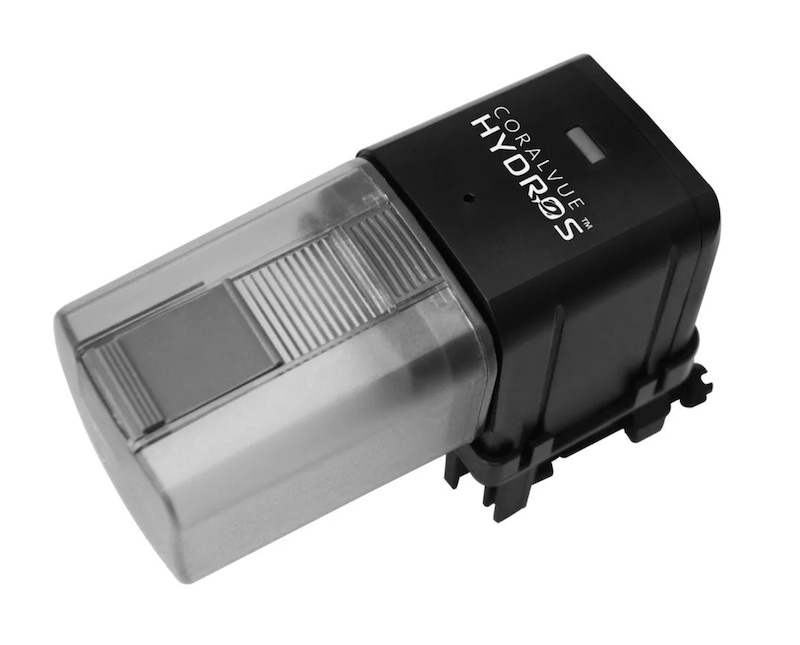 However unlike the battery powered Eheim feeder, the Hydros version is wired for USB so the batteries will never run out or need replacing, and it comes with mounting options for rimless or rimmed glass tanks, or can operate in a resting orientation. The feeding frequency of the Hydros Wireless Feeder is regulated by the app while the feeding amount is determined by the physical slider on the food hopper to widen or constrict the food dispenser.

There are cheaper versions of this wireless feeder available from various off-brand companies but we don’t have any faith in their ability to provide product support, and the Hydros app is much more usable than some hastily coded app from unknown freelancers. If you have a lot of tanks to feed, or very hungry fish, or want something to cover feeding duties while you’re away you probably can’t do much better than the CoralVue Hydros Wifi Wireless Feeder, at least until a frozen food dispenser is released.