How to Frag the Very Dense Branches of Large Stylophora

The Milka Stylophora is one of the most legendary corals in the reef aquarium hobby, and as far as we know the only stony coral strain from the mythical waters of the Red Sea. This purple polyped, yellow tipped Stylophora pistillata has been around the aquarium hobby for over 35 years, long enough to be grown, propagated and distributed with people forgetting its incredible pedigree.

But this article isn’t a recap of how this very rare coral became conquered the globe, but a tip for managing the wildfire growth that seems to outpace almost every SPS coral we’ve ever kept. It’s an incredible blessing that the Milka Stylo is such a fast grower under nearly all kinds of conditions, but its closely spaced branches and dense skeleton can become quite a hog for the precious elements we try to keep balanced in out reef tanks. 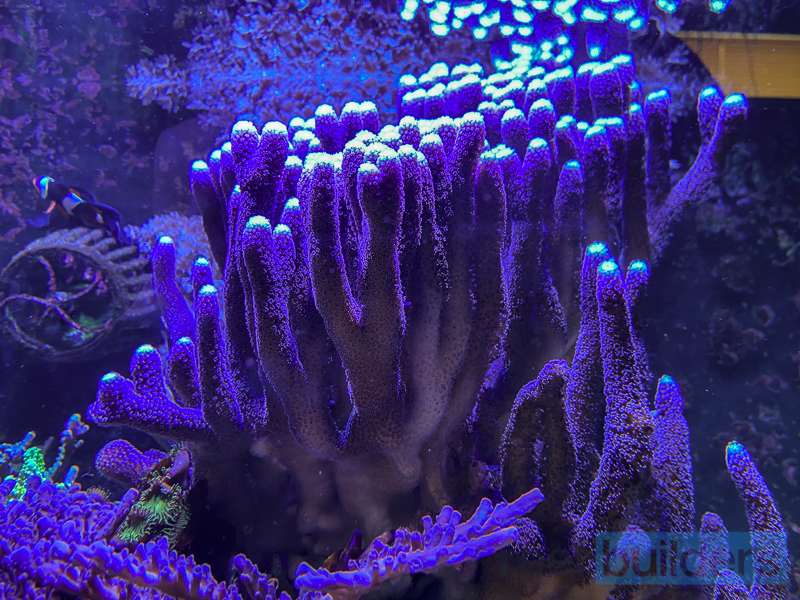 Grown under optimal conditions of high light and good water flow the super dense branches of Stylophora corals, and especially the Milka variety, can easily become so dense as to be impractical to frag using typical bone cutters. We’ve known some reefers to try and saw their way through the skeleton of Stylos that is almost as hard as ceramic but this is simply not a great solution for cutting an overgrown Milka Stylo down to size, but there is a trick to doing exactly that!

Yesterday we participated in some heavy handed pruning of Evan Montgomery’s SPS coral-packed reef tank which includes one colony of Milka Stylo that had grown completely out of control. Instead of using bone cutters or a small hacksaw we decided to use the density of the skeleton against it, employing a small hammer to gently fracture the branches from the main coral colony.

This hammering technique worked so well that we made short work of removing more than 50% of the coral’s mass in a matter of mere minutes. Surely we’re not the first to fragment a coral using a literal hammer but now that the Milka Stylo is much more common and growing into large colonies in more reef tanks than ever before, we thought this would be a handy tip to share with reefers who need to keep this awesome purple SPS coral in check, especially for large colonies that would be hard to remove from the displays in which the Milka Stylo is grown.

Three Levels of Dosing Setups at the Reef Builders Studio