The Mummy Eye Chalice coral is one of the oldest and most beloved of the classic strains of Echinophyllia but this coral has a unique trick up its tentacles. When it was first introduced to the reefing world by Isaac Seidel it was originally named the ‘Oregon Mummy Eye’ chalice coral and was referred to a reverse watermelon chalice with a mustard-green body coloration punctuated by pinkish orange mouths.

Over the years the named was shortened to simply ‘Mummy Eye’ and it has become a hardy, fast growing and highly versatile aquarium coral strain that has spread far and wide throughout the reef aquarium hobby. The interesting thing about the Oregon Mummy Eye is that its coloration and appearance is very dynamic and can morph and transform so much as to become unrecognizable compared to its original color pattern.

Longtime keepers of the Oregon Mummy Eye chalice will be all too familiar with this coral’s metamorphosis under aquarium conditions and especially blue heavy LED reef aquarium lighting where the coral will often turn a light fluorescent yellow over the base green and pink coloration resulting in a mostly orange coral. But over a long period of time we’ve seen the Oregon Mummy Eye chalice demonstrate an even broader color palette which is variable and unpredictable, throwing out splashes of red, patches of green, and even some spots or stripes of what appears to be a deep purple pigmentation.

Pictured above you can see two nice examples of a transformed Oregon Mummy Eye chalice coral from Aquarium Care Center and Legendary Corals which exhibit some of the color range of this more than thirteen year old strain of Echinophyllia coral. We’ve seen plenty of sizable frags of the Oregon Mummy Eye chalice for sale at reef shows, frag swaps and other reefers tanks which approximated the chalice corals pictured above but recently we were taken aback by a colony which was completely transmutated and just barely recognizable from its parent lineage.

The colony pictured above was acquired from Allyson Marie Perez of Mind Blowing Corals by our Japanese Reef Builders contributor in 2017, over which time this specimen has really grown and experimented with its color scheme. Unlike some of the orangey green Mummy Eyes Taka’s piece appears to have separated the orange and green pigments into radical swirls and stripes that streak throughout the entire colony in unpredictable ways.

The pink colored mouth are totally absent in Taka’s Oregon Mummy Eye chalice but this pigment can also be found in parts of the colony although it is less distinct and defined than the archetype. The color separation is particularly well defined around the perimeter of the colony where the coral more closely resembles the Acid Trip and Melting Pot chalices of old and by looking at this section you’d never guess it was the Oregon Mummy Eye chalice. 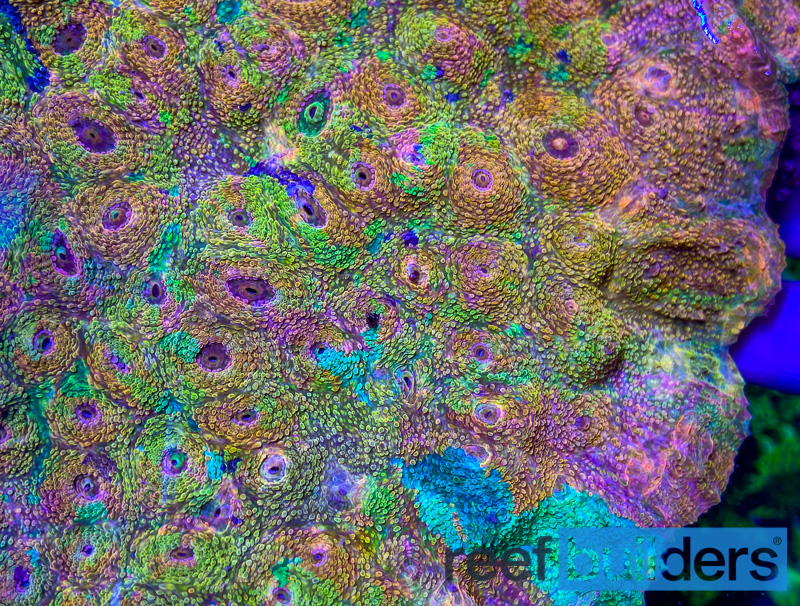 Taka-san kept his chalice coral under AI Hydra LED lighting for a few years and was recently upgraded to the Radion Gen 5 Blue under which it receives a very nominal amount of lighting intensity. The way that corals can change under reef aquarium conditions is by far one of our biggest fascinations with keeping and growing corals in our reef tanks and Taka’s Oregon Mummy Eye chalice coral is one of the most extreme examples of color-changing Echinophyllia. We wish we knew how and why corals can change their colors so dramatically but the first step to understanding the process is documenting these changes, and attributing the strain name to the proper, original lineage. 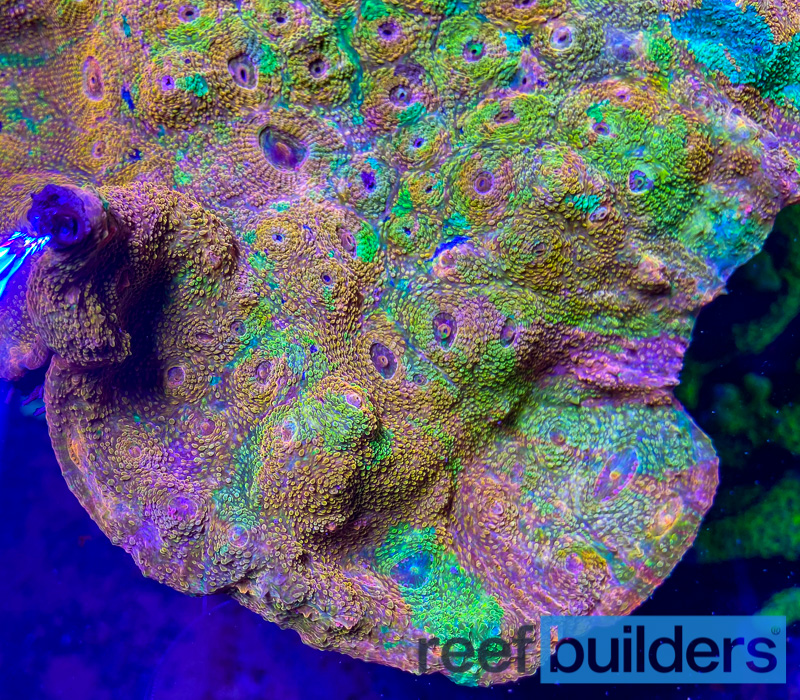