It’s no secret that the Deltec VF6000 has been one of our favorite automatic filter rolls for mechanical filtration of larger volumes of water. So it was with excitement that last month we learned of a new and improved larger model called the Deltec VF8000. There are so many ‘exotic’ European aquarium devices that take their sweet time arriving on American shores but to our delight, not only has the Deltec VF8000 already landed in the U.S., but we were fortunate enough to receive one of the first units which we’ve already put into service.

Since we previously had the Deltec Vleece Filter 6000 installed on one our largest 600 gallon system we already had all the necessary plumbing in place to hot swap the new slightly larger Deltec Vleece Filter 8000. Despite using the same 50 micron filter roll as the previous model, and having the same general area for water to pass through it, we’ve found that the Deltec VF8000 handles the high flow rate even better, living up to its 2,000 liter per hour bonus over the VF 6000.

Curiously, the VF4000 and VF6000 are no longer listed on the German Deltec website instead being replaced with new models called the VF5000 and VF8000 although the VF4000 is still available for sale from U.S. distributor Deltec USA. It stands to reason that these new models will replace their predecessors with new higher flow ratings and a wide suite of new and improved features for the same price.

Since we’re quite familiar with the first generation of Deltec’s fleece roll filters we were well aware of the changes which could enhance the VF6000 and it seems that Deltec has made some significant improvements to the second generation VF4000 and VF8000. Our unit is already well on its way to making our reef aquarium system cleaner and clearer while spooling up a ‘perfectly dirty’ roll of used filter paper during which time we’ve been able to identify 10 new features which should enable Deltec’s second generation of automatic filter rolls to perform better than ever.

Hanging Bracket – We’ve made a lot of noise regarding the need to elevate all models of automatic filter rolls out of the standing water on the sump in order to let gravity pull as much water through the filter material. Other smaller roll filters have long had an optional hanging bracket to achieve this elevation within the sump so it was a welcome addition to see hanging ‘hooks’ built into one side of the second generation Deltec VF8000, but it’s a little on the narrow side so it’ll need to hang on an internal divider instead of usually euro-braced outer sump walls.

Direct Drive Motor – The biggest change to the Deltec Vleece Filter is the use of a motor in a direct drive orientation which eliminates the need for any gears. When the spool of used material starts to get full the larger radius increases the torque required to turn the spindle which at times caused slippage of the gears but without any gears the new design of the Deltec Fleece Filter works better than ever.

Thinner spooling Spindle – The force of the direct drive motor is now even more efficient because the spindle for the used filter paper is now much thinner which will reduce the final radius when the used fleece roll starts to get full.

Smoother Unspooling Assembly – It might seem like a minor change but not only is the used filter spool thinner, but the spool for new, clean filter paper is now much larger and instead of spinning around a thin central axis it now spins around a much larger diameter, further reducing friction and the force required to advance new fleece.

Locking Retainer Bar – The original retainer bar keeping the filter paper in place was secured by magnets on both sides which was a clever solution but tended to pop out under higher loads. The new retainer bar has a longer handle which now locks into place with a large handle that has the added bonus of also guiding the filter paper and keeping it flat.

Inlet Diffuser – The inlet of water coming into the Deltec VF used to simply point straight down, sometimes causing turbulence around the filter paper and pushing it towards one side or another. But now the new VF8000 has a very nice large clear plastic diffuser which should help reduce or eliminate turbulence leading to much more even water passage over all parts of the fleece material.

Filter Paper Guide – one detail which is easy to overlook is that the retainer bar now has angled, chamfered guides on both ends which will further help to keep the filter material in place and centered for perfect alignment with the gridded filter plate.

Larger Overflow Channel – The new VF8000 has a much larger overflow channel built into the housing which not only allows a lot more water to flow through, but does so without the gurgling that was very audible on the previous models when the water level within the unit got too high.

Enclosed Housing with Directed Outflow – One of the more surprising new changes to the design of the Deltec fleece filter is that the entire unit is now enclosed as opposed to the more open, free flowing design of the first generation. The new enclosed housing helps to contain some of the noise from water draining through but it also now has a large diameter outlet which we really like since it creates a lot more flow through the sump helping to eliminate dead zones and areas of detritus buildup. It’s possible that with this new single outlet the Deltec VF4000 and VF8000 could be plumbed and used externally except there’s no access to the inside space for tightening down a bulkhead. 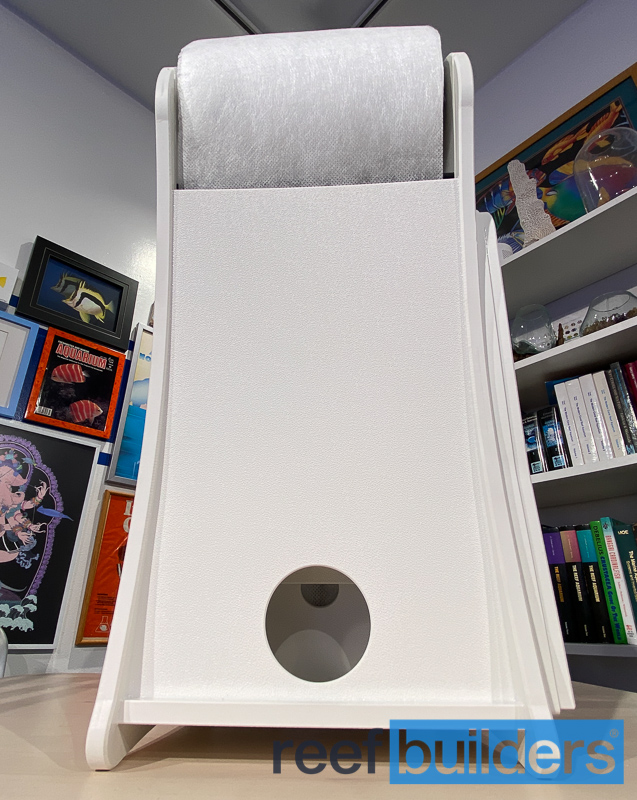