Circled Dragonet Collected for the First Time in 6 Years

The circled dragonet is a very unique species of tropical reef fish that has the distinction of being one of the rarest species of this group which is rarely seen by divers, and more seldomly collected in the aquarium hobby. Most marine aquarists will be familiar with the very colorful mandarins and the very interesting scooter ‘blennies’ and dragonets, but in many ways the circled dragonet bridges the gap between the hyper colored and super camouflaged species of Synchiropus.

Synchiropus circularis is unique in having a very bold pattern of well outlined circles on the sides and top of its body like a green or spotted mandarin, but it has a more muted coloration that helps it to blend with benthic encrusting organisms and coralline algae. No doubt this intermediate pattern and color is very effective at helping this fish blend in with its environment making it very hard for divers and collectors to find in the wild. 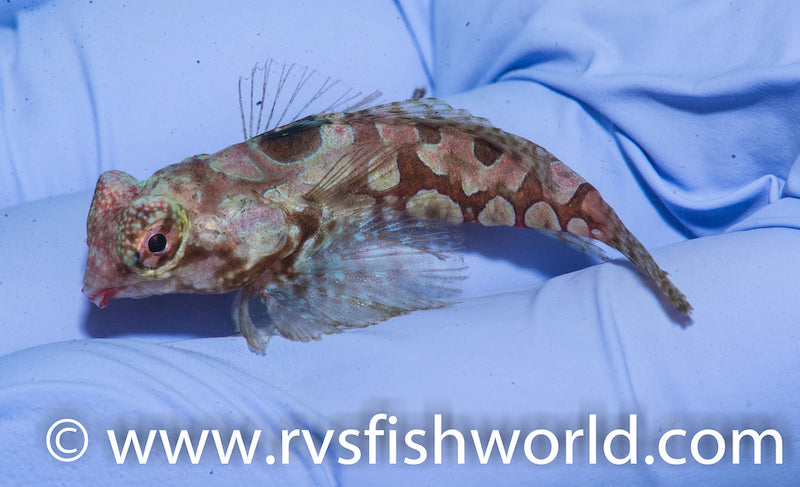 The circled dragonet is most often encountered in the Philippines so it’s no surprise that the latest encounter is a collection by Manilla-based RVS Fishworld who shared the first aquarium photographs of this fish we’ve seen since 2015! As we can see from the beautiful profile photograph in the header image this specimen of circled dragonet is a female with a small black dorsal fin because like many other Synchiropus the males of S. circularis have a large showy dorsal fin that they used to attract the females.

We’re certain that if circled dragonet were as common as the Ruby Dragonet they would make for beautiful and fascinating marine fish in a tiny package but something about their behavior, habitat, cryptic nature or a combination of these factors has made them one of the most elusive species of dragonets in the ocean. Captive bred green and target mandarins have become quite obtainable in the marine aquarium hobby over the last few years so we can only hope that one day more specimens of circled dragonet will make their way to captive breeding programs so we don’t have to wait half a decade in between sightings.

Zeovit Coral's has a Lot of Promises to Live up to