Thor dicaprio, the Caribbean Sexy Shrimp is Its Own Species

Thor dicaprio is the first new species of Sexy Shrimp since the original description of Thor amboinensis over 100 years ago in 1888. Just to bring you up to speed, the Sexy Shrimp as we know it is is a circum-tropical species occurring in nearly all tropical oceans of the world from the Indian Ocean to the Pacific and the tropical Caribbean part of the Atlantic.

It really comes as no surprise that a species which occurs over such a wide natural distribution would consist of different species, especially the isolated Caribbean population which pays homage to Leonardo DiCaprio, the actor and environmental activist who formerly reigned as a teenage heart throb. The new Caribbean species of the sexy shrimp was recognized following much genetic analysis which actually revealed the presence of a possible five different cryptic species of sexy shrimps. 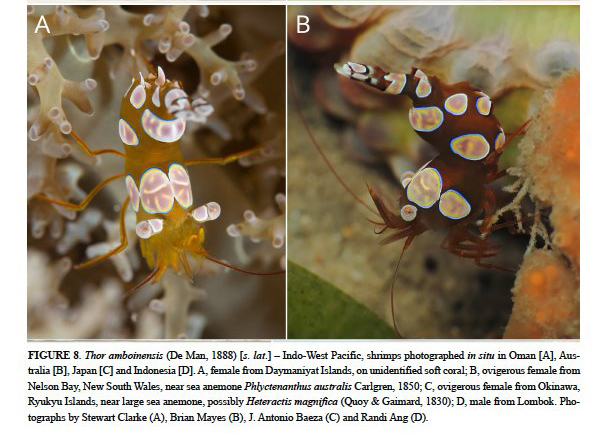 Like we’ve already seen with previously unrecognized cryptic species such as Tridacna noae, once genetic analysis confirms their existence some distinguishing physical attributes become more readily apparent. In the case of the sexy shrimp species complex the new Dicaprio sexy shrimp from the Caribbean is clearly identified by its striped antennae which are solidly colored in the widespread Indo-Pacific species. [Mapress]