API Nitrate Reagents are ‘Usable’ With the Hanna Checker

The Hanna Nitrate Checker is one of our favorite new aquarium tools to measure the nutrients in our reef tanks but the only limiting factor has been getting enough of the official Hanna nitrate reagents. We’ve been carefully doling out which tanks are most deserving of very accurate nitrate measurements until we found out that a few creative reefers have figured out how to use API Nitrate Reagents in conjunction with the Hanna nitrate checker.

The protocols for using the API reagents approximate how the Hanna nitrate test is performed although you do have to account for two liquid reagents with the API as opposed to the single dry powder of the Hanna official reagent. We feel it’s important to stress that the API Nitrate reagents only qualify as ‘usable’ with the Hanna checker as the results are not exactly the same but they are in the ballpark of values, which is still a huge improvements over having four or five shades of fuschia pink to discern with our fallible, analog eyes. 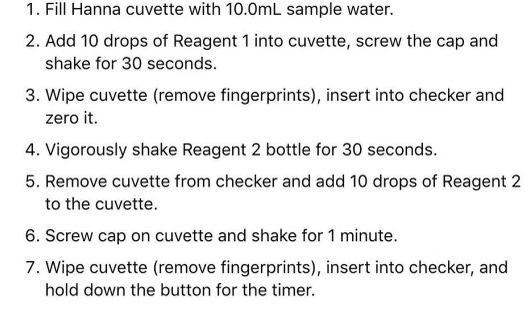 We’ve performed around 30 tests using the API reagents with the Hanna Checker on aquariums with nutrient levels ranging from 0 to 65 ppm and the average deviation is around 10% from the Hanna official reagents with some BIG caveats. While the average difference is usually around 10%, sometimes we’ve seen the values turn out exactly the same at 5ppm, other times the API will be 100% higher with the Hanna reagents giving us a value of 1ppm while the API reagent gives us 2ppm.

Other than the Hanna checker not being designed for API reagents, we haven’t been able to determine what causes some tests to come out the same and others to turn out higher or lower. We do believe that using the API reagents with the Hanna Checker is still better than trying to eyeball the precise color, but if you’re trying to quantify a precise nitrate level of your aquarium’s nitrate consumption or production you’ll still want to go with the official Hanna nitrate powder reagent.