Ecinu CO2 Control Device is So Much More than a Regulator

Ecinu is an interesting company out of Korea which just dropped our jaw with some very exciting and original aquarium hardware. Along with a submersible VR camera and an automatic fish feeder their digital CO2 control device is unlike anything we’ve ever seen before and all of it is fully wireless and cloud connected.

The EG-401 digital carbon dioxide controller looks less like a CO2 regulator and more like a GPS device with a full-color screen with loads of ports to expand the functionality of this machine. The detachable screen can be installed remotely for easier at-a-glance viewing and a BNC connector allows the installation of a pH probe to achieve an unheard of level of supremacy over the dispensing of the important acidifying gas.

These features are only part of the perks to the Ecinu CO2 controller because its most interesting feature is actually how it measure the dispensing of carbon dioxide. Instead of metering gas by counting bubbles the Ecinu actually measure cubic centimeters in CC’s using an optical sensor for extremely accurate measurement and subsequent dosing of CO2.

The Ecinu dynamically adjust the release of carbon dioxide to keep a constant flow rate even while the pressure from the regulator decreases as the cylinder slowly empties. When used together with a pH probe the Ecinu becomes a smart CO2 controller which is the alpha and omega for acidifying water inside a calcium reactor or carbonizing a freshwater planted aquarium. 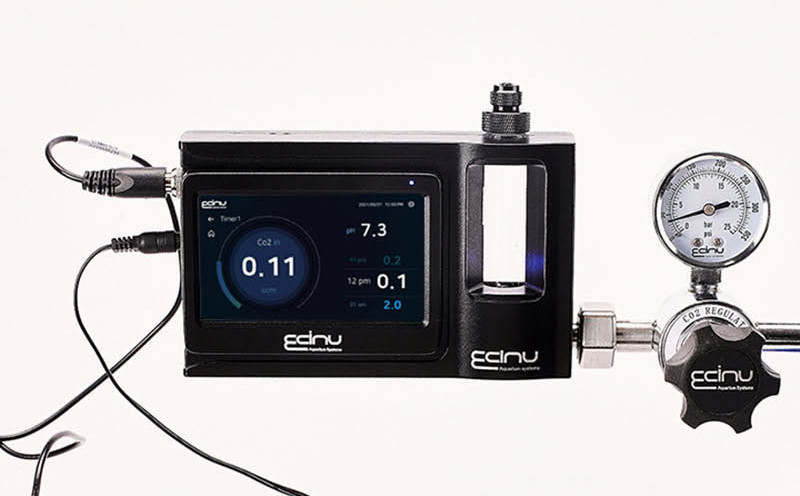 An older version of the Encinu CO2 regulator is featured in a video from 2017 which you can see below but the newer version looks much smaller and more like a consumer device. Currently the Ecinu is only available in Korea and we’re not crystal clear about the price but we’ve found units selling from between $500 and $600.

With all of the feedback that the Ecinu provides in terms of pH trends and actual CO2 consumption rate, of both plants or calcium reactor media, this smart controller might provide users with a special data set that we’ve never had before. While we welcome the Ecinu we are perplexed as to why this sort of device even exists, and we have to believe that the research and development must have come from either the medical field or some kind of high precision manufacturing hardware but we’re glad it’s available for aquarium applications. [Ecinu]

pTank pico tanks are tiny flat-packed aquariums you build yourself