Pericelis tectivorum is the name that was bestowed to a rare species of large flatworm that is occasionally encountered in reef aquaria and can really shock reefers who don’t know what to make of it. If you’re familiar with the size of red planaria or the small species that sometimes grow on our LPS the newly named Pericelis tectivorum is truly giant as we’ve seen these as small as two inches long as even as large as four inches, 10cm long!

The other striking thing about this giant flatworm is that it moves very fast and can scurry away quite quickly should you find it while turning over a rock or coral. We first encountered and wrote about the giant flatworm with its somewhat attractive leopard pattern way back in 2009 and we immediately surmised that it wasn’t eating any of our corals as we didn’t have any corals showing any signs of being grazed upon. 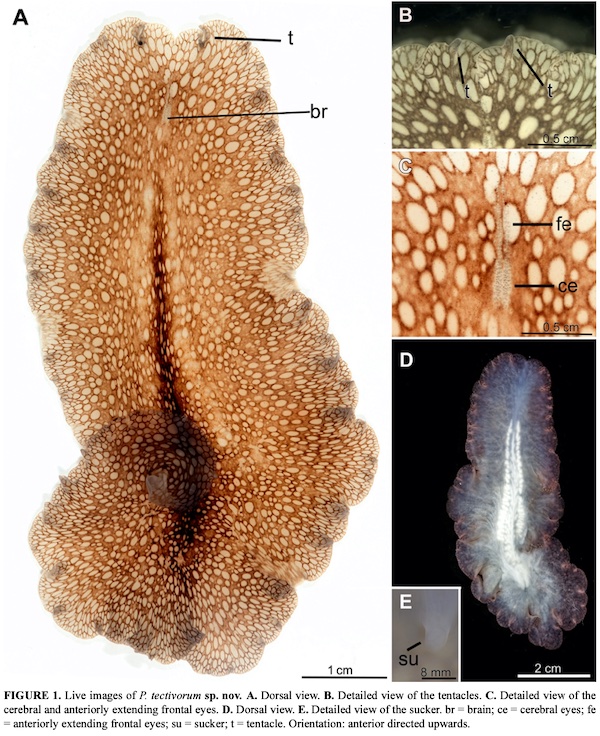 This giant flatworm species would actually be quite cool if it wasn’t so creepy and we’re not surprised that this species was actually discovered from ‘coral bearing aquariums’ (reef tanks) in Innsbruck Austria so we don’t have any details about its distribution on natural reefs. But because the type specimens of Pericelis tectivorum were obtained from aquaria the animals were actually kept alive for long enough to confirm our suspicion that this finger sized flatworm is a micro predator.

In culture the large Pericelis tectivorum were observed eating smaller snails such as Tectus fenestratus but we wouldn’t trust it with any Turbo, Astraea, Trochus or Stomatella – these flatworms don’t grow to such large sizes by being picky eaters. Thanks to Claude Schuhmacher of alerting us to the 2019 description of Pericelis tectivorum which finally puts a name to this unique reef animal which can be alarming if you don’t know what it is and aren’t expecting to see it in your aquarium.